Over time, running may produce greater weight loss than walking, especially in men and overweight women, according to research published in the official journal of the American College of Sports Medicine. This study, in the April edition of Medicine & Science in Sports & Exercise®, indicates vigorous activity can produce greater weight loss when compared to moderate-level exercise.

“After studying groups of people who had adopted a regular walking or running program, both groups lost weight, but the runners lost significantly m 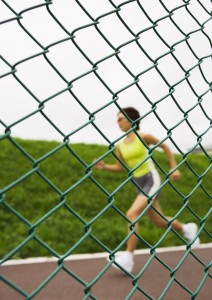 ore,” said the primary investigator, Paul T. Williams, Ph.D., of Lawrence Berkeley National Laboratory. “Many clinical trials seem to suggest that moderate and vigorous activity produce equivalent loss of total weight and abdominal fat, but our results indicate that high-intensity exercise can indeed produce greater results. An equivalent amount of exercise produced 90 percent greater weight loss for running than walking in those with a BMI over 28.”

The study conducted a regression analysis of the change in body mass index (BMI) of 15,237 walkers and 32,216 runners under free-living, non-experimental conditions over 6.2 years. After follow-up testing, runners demonstrated higher energy expenditure and greater decrease in BMI, though both groups showed weight loss.

Because participants in this study were volunteers, they tend to be healthier than the general population. Further research is needed to determine if the conclusions of this study would be supported in a controlled clinical trial.

The American College of Sports Medicine (ACSM) is the largest sports medicine and exercise science organization in the world. With more than 45,000 members and certified professionals worldwide, ACSM is dedicated to advancing and integrating scientific research to provide educational and practical applications of exercise science and sports medicine. Contact ACSM at www.acsm.org.