With plans to promote the NBA in India in his mind, Vivek Ranadive, a software tycoon from Silicon Valley, Calif., who is vice chairman of the Golden State Warriors, is a key figure in the bidding war for the Sacramento Kings basketball team.

With two groups vying to buy the Kings, the NBA owners are expected to discuss the merits of the two groups and make a decision by early May.

“I believe basketball will be the global sport of the 21st century because it can be played by young and old, boys and girls, indoors or outdoors, rich or poor,” Ranadive is quoted as saying by The New York Times. “Independent of whether the Kings bid succeeds or not, I’m very committed to making it the No. 2 sport in India.” 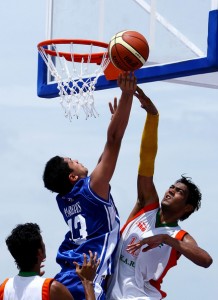 A group led by Christopher R. Hansen, a hedge fund manager, and Steven A. Ballmer, the chief executive of Microsoft, was thought to have the upper hand. Said to have a tentative agreement to buy 65 percent of the team from the Maloof Family, the group plans to move the team to Seattle and build a new arena there.

Their rivals, including Ranadive, the founder of 24-Hour Fitness, Mark S. Mastrov, and Paul E. Jacobs, the chief executive of Qualcomm, reportedly made an offer worth about as much and promised to build a new arena in Sacramento.

Ranadive, will become the face of the Kings if his group is chosen. He would be the first majority owner of Indian descent in the NBA and, as Ken Belson writes in the NYT, “become an instant celebrity among the Indian diaspora and in India. His star power in India should help supplement the NBA’s fledgling efforts there.” To become the general partner of the Kings, Ranadive will have to sell his minority stake in the Warriors.

Ranadive’s company, Tibco Software Inc. of Palo Alto, has revolutionized the use of data at such companies as eBay and Southwest Airlines. Since 2010, he has employed a kind of “Moneyball,” data-driven approach to the Golden State Warriors. It also applies to selling tickets and merchandise to fans on their smartphones by tailoring sales pitches to their individual preferences.

For more information about the Sacramento Kings sale, click here.