It is normal behavior for student-athletes to express frustration and anger when they are unable to compete due to a concussion. This behavior is likely attributed to not fully understanding what a concussion is and the uncertainty of the symptom recovery timetable. But, many athletes tend to deny concussion symptoms because the culture of athletics encourages athletes to be tough and play through the pain (Echemendia, 2012).

Athletes are strongly motivated to return to play following a concussion and often minimize symptoms (Echemendia, 2012). Interestingly, there is research that presents the notion that women tend to sustain higher rates of concussions than men, as well as report different types of symptoms (Covassin, Swanik, & Sachs, 2003). There is certainly ambiguity in the sports medicine literature concerning this claim, but there are several factors that are considered for this difference, such as hormonal differences, differences in neck strength, technique differen 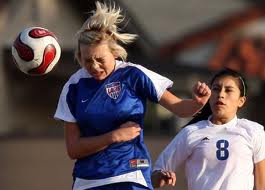 It is important for coaches to identify the psychological component of sustaining a concussion and the emotions associated with athletes wanting to return to competition (Hayden & Lynch, 2011). With the many psychological aspects that can hinder an athlete’s recovery process such as lack of confidence, lack of motivation, and anxiety issues, coaches and athletic trainers must create a positive environment when athletes are out of competition due to a concussion. Athletes may also feel isolated or alienated from teammates during the recovery process; therefore, coaches and athletic trainers should create ways for athletes to relate with the team.

Many high school athletes do not understand the potential consequences of sustaining a concussion and usually ignore symptoms, leaving a large amount of concussions unreported to coaches or athletic trainers. Under-reporting symptoms is a common practice at the high school level and should be addressed with educational strategies. Athletes should be reminded that achieving full recovery is crucial before returning to competition or practice (McGrath, 2010). Coaches should support their athletes in being honest about persisting symptoms and help them understand that accepting the short-term loss of playing time is a wiser choice than risking further damage (Guskiewicz et al., 2003; McGrath, 2010).

Readers should check out the following link for a story out of Arkansas about the underreporting by high school athletes of concussions:  http://www.fox16.com/news/story/New-survey-reveals-teens-under-report-concussions/g_LhgYT7yECiUqGuHFq8fg.cspx

Brandon Spradley is a second year Teaching Assistant and doctoral student at the United States Sports Academy.  He was an all-SEC performer in track and field at the University of Alabama, where he obtained his bachelor’s and master’s degrees.