Americans are inundated with information about how we have become a physically unfit nation.  Even though our life expectancies have not fallen, we are having to spend more and more health care dollars to fight chronic diseases linked to obesity such as diabetes, hypertension and heart disease.

The Center for Disease Control (CDC) in Atlanta has just published information that shows each state’s obesity rate.  As a whole, around 35 percent of all adult Americans are considered obese, meaning they have a Body Mass Index (BVI) of greater than 30. 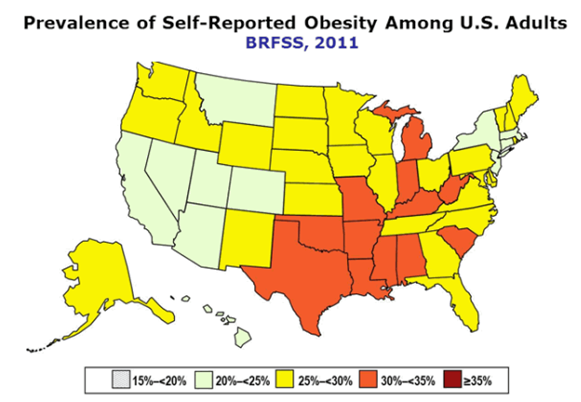 But, how do those numbers shake out by state? The Centers for Disease Control and Prevention (CDC) recently mapped out the percentage of obese Americans by state using 2011 data, finding that greater percentages of obese people tend to reside in the South.

Mississippi has the highest rate for all residents at 34.9 percent, while Colorado has the lowest rate at 20.7 percent.  Even in Colorado, however, more than one in five residents is considered obese.

The Huffington Post just published information on a state-by-state basis.  Readers can compare states by using this obesity map, or scroll through the slides found at http://www.huffingtonpost.com/2012/08/14/obesity-rate-by-state_n_1774356.html.