Youth football leagues across the country will soon begin to sign players up for their fall leagues. But there is a growing concern, even among star football players, that football is simply too dangerous for our youth.

Former Rams and Cardinals quarterback Kurt Warner recently said that the prospect of his young sons playing football is a “scary thing.” More recently the father of three-time league MVP quarterback Tom Brady has said that if he knew then what he knows now he might have prevented his son from ever playing football. 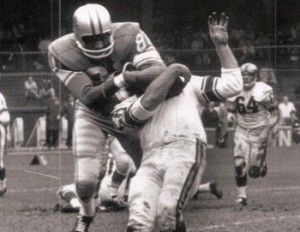 Currently, the line of former players suing the NFL over traumatic brain injuries stands at more than 2,200 players who have joined some 80 separate lawsuits. These suits all basically allege that NFL officials and owners knew for years about the dangers posed by repeated blows to the head sustained by NFL players and failed to protect them.

The Center for Injury Biomechanics, a joint project of Virginia Tech and Wake Forest universities, estimates that there are 2,000 professional, 100,000 college, 1.3 million high school and 3.5 million youth football players in the U.S.  Early studies they have conducted suggest that traumatic hits do occur in football all the way down to 7 and 8 year olds.  A majority of the hits occurring in youth leagues come during practice and not games.  Researchers suggest that youth leagues adopt the policy the NFL mandated in 2011 and ban hard hits in practice.

It has to be noted that studies of youth players are in the early stages.  Attitudes about the sport formed over the past 100-plus years aren’t going to be changed overnight.  Proponents of change frequently point out that they don’t want to eliminate contact football and have everyone play flag football.  They simply want to improve protective gear and to take blows with the helmet completely out of the game.

That is easier said than done.  Since 2009 the NFL has been fining players for excessive blows delivered with a helmet.  Many players have been outspoken in opposition to what many see as a “sissification” of the game.

Many people are watching to see if participation by teenagers and younger players remains steady.  People are also watching to see if concerns about providing better equipment, safety training and availability of medical treatment at game sites drives up the costs of the sport to a point where many schools, leagues and families simply cannot afford to let their boys play.

Since 2009, 35 states have passed laws that prohibit players on school teams from returning to play after taking a blow that was diagnosed as a concussion until they have medical clearance from a doctor.  Keith Guskiewicz, a researcher at the University of North Carolina and a member of the NFL’s Head, Neck and Spine Committee, is currently testing whether the use of sensors in helmets and mouth guards can reliably detect and measure head impacts and lead to development of better helmets and contact rules.

Guskiewicz headed a three-year survey of college and high school players that reported in 2000 that 5.6% of high school players and 4.4% of college players sustained at least one concussion per season.  This finding supports the idea that younger players may be at higher risk of sustaining major brain injuries.  He attributes this to less coaching expertise, particularly in proper teaching of protective techniques on the field.

Very few people actually want to see the sport of American football permanently sidelined.  There is too much money at stake in any event to foresee a time when tackle football is no longer played.  Cynics point out that then President Theodore Roosevelt led the outcry against violence in college football in the first decade of the 20th century—pressure that helped lead to the creation of the NCAA to implement rules leading to safer play.  Yet over 100 years later, we are still addressing the same issues.

It was great as a kid to watch Detroit Lion safety Dick “Night Train” Lane bring down opponents with his infamous clothesline tackle.  Fans of that era were also thrilled about the violent world of New York Giants middle linebacker Sam Huff and watched Chicago Bears games to see who the next victim of middle linebacker Dick Butkus would be.  The threat of violence was part of the rapid growth of interest in pro football.

The reality is that our society is at a crossroads with respect to football.  If significant progress is not made in providing better, safer playing conditions for players, then the game millions love just might vanish into the mists of history.

Readers can view a recent USA Today story about youth football, “Not Safe for kids?” by clicking here.