A series of spectator scandals have driven Germany’s football supremos to the verge of despair. Wolfgang Niersbach, President of the DFB national soccer federation since the beginning of March, and Dr. Reinhard Rauball, Chairman of the German Football League, have declared in a joint statement following the latest incidents in Düsseldorf, that the encroachments in the season just ended had “reached a point where new ways must be found to tackle violence within the context of football matches.” 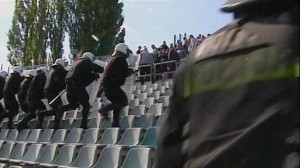 Niersbach and Rauball speak of “consternation and concern,” and about the fact “that such scenes in a football stadium which are irresponsible and endanger the health of the many peaceful fans cannot be tolerated and must be consistently punished.” The latest disturbances “sadly demonstrated once again that the previous concepts and measures alone are no longer sufficient,” emphasized the two soccer leaders and also called for assistance from the state.

“The DFB and League Federation together with the clubs will not allow football to be misused as a stage by hooligans and violent elements,” it is stated in conclusion. “Football will exhaust its possibilities in the battle against violence and depends upon the competence and determination of state institutions. We can only solve the problem in close cooperation between football, politics, the police, the judicial system and the great majority of the genuine peaceful fans. There can be no place for violence in football.”

In Düsseldorf during the Bundesliga relegation play-off between Fortuna Düsseldorf and Hertha BSC Berlin, two minutes before the final whistle hundreds of fans invaded the pitch causing an interruption of 20 minutes. When the fans were forced back onto the terraces once again, the referee allowed the remaining two minutes of the seven minutes of overtime to be played, before finally ending the match. Meanwhile, the Berlin club is demanding that the match be replayed, claiming that due to the incidents its team was robbed of its chance to score the winning goal in a powerful final offensive.

In the official grounds for the protest Hertha admittedly states that the game was only continued in the interest of the safety of the players. “The only purpose of the restart of the match was to prevent a further escalation. It was the police’s tactic to play the game to the end in order to avoid further disturbances,” said the lawyer of the Berlin club. The protest was heard by the DFB’s sports court of arbitration.

The score was 2-2 when the match was interrupted with the Berlin team thanks to a powerful final offensive was indeed close to scoring the winning goal which would have allowed them to win the relegation playoff and retain their place in the top-tier Bundesliga, after losing the home leg 1-2.

In another sad note from German football the latest example of the ever increasing exorbitance in sport is being delivered by the German Sat1 commercial TV broadcaster. The channel reported for more than 20 hours on the Munich Champions League Final between FC Bayern Munich and London’s Chelsea FC.

Following the game, Sat 1 showed Munich’s games on the way to the Final, including the two semi-final matches against Real Madrid. Even so-called quality newspapers are joining in the football hysteria: Munich’s Süddeutsche Zeitung published a 24-page supplement devoted to the final in the middle of the week.

This article appeared in the Sport Intern, a sport blog published by Karl-Heinz Huba in Lorsch, Germany.  The article is reprinted here with the express permission of the author.  Mr. Huba can be reached at ISMG@aol.com.