I didn’t know Junior Seau although I met him on the day he was drafted into the National Football League in 1990 and probably interviewed him after a football game a few times more. From all accounts, he was a fearsome presence on the football field; a killer who at times could control a game defensively. 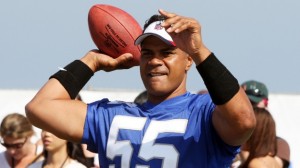 But Junior Seau didn’t live to be a ripe old age and until an autopsy is performed and a police investigation is complete, there is no need to speculate about the circumstances surrounding Seau’s death other than he was found dead of a shotgun wound on the morning of May 2, 2012

The gun wound should strike a nerve among former players. It seems that is becoming a way of life and death among NFL alum suffering from life altering injuries that probably came from years and years of absorbing hits on the football field.  Seau is now just another former player who is dead from unnatural circumstances.

There is either some serendipity or karma about Seau’s death because National Football League Commissioner Roger Goodell had just announced the suspension of four players who performed with the 2010 New Orleans Saints football team who allegedly put up money to knock out opposing players.

Football was nearly banned in the very early part of the 20th century by President Theodore Roosevelt when players were maimed or died on the field during college games. Roosevelt forced football people and college presidents to “clean up the game.”

The National Football League’s modern day success was partially built on the “Violent World of Sam Huff” a 1960 CBS news magazine show which featured Huff and the Giants and the way the team played defensive football.

The sport is entertainment for fans but there have been tragic consequences for some of Sunday’s grid iron heroes. In April, former Atlanta Falcons player Ray Easterling killed himself. The suicide death of one-time Chicago Bears defensive back Dave Duerson in 2011 received plenty of coverage but that didn’t stop former players from ultimately taking their own lives.

This reporter gets many e-mails and calls from former players. A column on Gene Atkins, a former defensive back with the New Orleans Saints led a former player to call me.

“I read the story you did on Gene Atkins,” said the former player who was on a Super Bowl championship team. “In reading this story, I felt that I was reading about myself. I am currently on SSDI (Social Security Disability Insurance) and Non-Degenerative NFL Disability. I have been diagnosed with Post-Concussion Syndrome. I have been in a rehab facility twice to treat my depression, cognitive learning and chronic pain. I have been struggling with my depression, loss of memory and chronic pain for a long time. It was hard – and is still hard – for me to accept. I get really confused when the NFL doesn’t accept me. The NFL don’t even have a number for retired players that are depressed or even suicidal. Dave Duerson was my friend. We talked and played in golf tournaments after we retired. What he did could have easily been me.

Look at the number of NFL safeties that are going through the same problems. We all played around the same time and all were known as and trained to be head hunters. Seek and destroy– that’s what (a coach) told me to do. Make people afraid to come in your territory. I had my best game in the Super Bowl and don’t even remember playing in that game. I only know what happened by watching the tapes and talking to the players. I was knocked out during the first series of the game and had my nose broken when (a running back’s) forearm came throw my open face mask.

“Just wanted to let you know that these bounties didn’t just start.  I won’t say under what coach and who directed it; but I received bounty monies and so did a lot of my teammates. We all were excited about going to the early Monday morning meeting. This is when we got our cash for big hits, knockout, roaches and whatever name you wanted to use. We got paid in cash and watched film as a team to make decisions on what hits would qualify.

The former player in question has not followed up after his e-mails. But his story is quite similar to many others. Depression, loss of family, living on the government dole because the National Football League Players Association never negotiated a post-career benefit package is common.

Players Association Executive Directors from Ed Garvey to Gene Upshaw to DeMaurice Smith have traded future benefits for “Money Now”, which was the slogan of the players during the 1982 National Football League Players Association walkout. The players association failed the membership in 1982, 1987 and every subsequent collective bargaining negotiation.

Goodell, the New Orleans Saints franchise, Saints management, coaches and players are lucky that law enforcement officials are not at initial glance investigating the whole bounty case and that the league is being allowed to handle the situation.

During the news conference introducing Benson as the new Hornets owner, Stern told the “probing” media that Benson would not answer any questions about his Saints, the bounties, the suspensions imposed on Saints upper management and coaches and that he was there to talk about basketball.

“With all due respect Commissioner Stern, Mr. Benson was handed over $186.5 million between 2002-10 as a thank you for keeping the Saints in New Orleans despite having a long-term lease. The state has rebuilt the SuperDome at a cost of many millions of dollars, the state has created a tax-free zone between the Dome and the arena and Mr. Benson bought the Dominion Tower from the state, renovating it and then renting office space to the state. Given that Mr. Benson is getting hundreds of millions of dollars from taxpayers, it is incumbent upon him to answer questions. Are you, Mr. Stern, afraid of real questions?”

Bob Costas talked about steroid usage in baseball in the 1990s as did the Washington Post’s Tom Boswell. That is about the extent of reporting in sports. The Lupicas, the Alboms and the rest of the big city sports columnists fall flat on their collective faces when reporting on sports real issues. There is an awful lot of hype surrounding Bryant Gumbel’s HBO show but there is little substance in the program.

Will the media wake up and really cover sports like a business? Doubtful unless you count Mike Lupica’s Madison Square Garden experience as better when the Knicks win so they better sign the right stars to make the Garden rock like it did in 1994.

Junior Seau will be lauded in death and remembered as a great player. But to some, he is just another statistic. Another young man, 43, who died prematurely after a spectacular career. There are newer and younger stars who will provide Sunday or Monday night or Thursday night entertainment; and Friday night high school football is still revered as is Saturday college football. The players are interchangeable and disposable. The games will go on.

Evan Weiner, the winner of the United States Sports Academys 2010 Ronald Reagan Media Award, is an author, radio-TV commentator and speaker on “The Politics of Sports Business.” His book, “The Business and Politics of Sports, Second Edition” is available at www.bickley.com or amazonkindle. He can be reached at evanjweiner@yahoo.com.