Athletes of all levels —from youth leagues to professional — benefit from the expert care offered by a team physician. According to the team physician consensus statement released by the American College of Sports Medicine (ACSM) and five other professional organizations, the care of a team physician is a necessary component to providing the best possible medical treatment and care to any athlete. 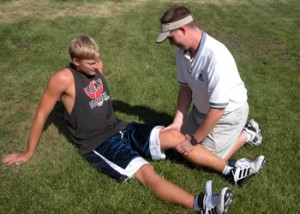 The consensus statement, titled “Team Physician Consensus Statement 2013 Update,” updates recommendations originally published in 2000. The update upholds the high standards set by the original document and also provides guidance on new issues in the field that have evolved in more recent years. New in this document are sections guiding the practice of team physicians relating to ethical and medicolegal issues. Like the original version, the 2013 update outlines medical qualifications and education and medical administrative duties as well as responsibilities recommended for all team physicians.

“A team physician is uniquely qualified to offer the best care to an athlete of any level,” said Stanley A. Herring, M.D., FACSM, chair of the writing group and one of the team physicians for the Seattle Seahawks and Seattle Mariners. “Their education, training and experience, combined with their ongoing relationship with their team, allow them to offer the best possible care to the athletes under their supervision.”

Since the original team physician consensus statement was issued, a series of supplementary documents have been published, making recommendations on specific issues related to a team physician’s practice. The supplementary documents address pertinent topics such as return-to-play decision, concussion (mild traumatic brain injury), injury and illness prevention, sideline preparedness, and psychological issues, among other important topics. All of the team physician consensus statements can be accessed on ACSM’s website.

“In every community, dedicated professionals serve on the sidelines and in training rooms to keep athletes safe, healthy and performing at their best,” said Herring. “Supported by athletic trainers and a host of other professionals, they devote many hours (volunteering, frequently) to those under their care. We owe team physicians a pat on the back for the central role they play in helping millions of people safely enjoy the benefits of sports participation throughout their lives.”