Joe Weider was a pioneer in the business of bodybuilding. Weider developed a multi-million dollar fitness publishing empire, including such publications as Muscle and Fitness and Men’s Fitness. He was also the person who discovered Arnold Schwarzenegger at a bodybuilding contest in Austria. He then sponsored Schwarzenegger’s move to the United States.

In his heyday, Weider built an empire from his Los Angeles base through the sale of mail-order bodybuilding courses and his magazines. 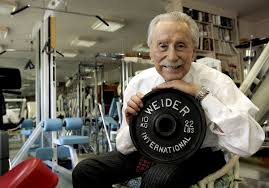 He also developed and marketed a line of fitness equipment. Many people credit him with being the primary driving force behind the development of a subculture of fitness. In 2008, a Gallup Poll found that one quarter of all Americans claimed to lift weights at least once per week.

Weider grew up in a working class neighborhood in Montreal. As a young teen, he was told by a wrestling coach that he was too small and frail to make the team. Weider then looked around and could not find any suitable exercise equipment. He went to a local junkyard and got the owner to weld two old flywheels to an iron bar to make a 75-pound dumbbell.

When Weider discovered Schwarzenegger, he offered to pay his living expenses in southern California, if Schwarzenegger would work out a local gym and allow Weider to photograph him for his magazines. That move made Schwarzenegger a symbol of big muscles and set the stage for his spectacular acting career.

Weider sold his first publication in 1940 for 75 cents. He use an old mimeograph machine to put the magazine together. By the time he sold his publishing business to American Media in 2003 it was worth $357 million.

After World War II, Weider and his brother Ben founded the International Federation of Body Builders, which sponsored the Mr. Universe and Mr. Olympia contests. The brothers eventually established affiliates in 170 countries.

Weider developed his own body into the classic bodybuilder look. He took on the nickname of “The Master Blaster.” He developed a line of food supplements and promoted a healthy lifestyle that involved diet and weight lifting. Over the years, he wound up involved in several disputes with regulators over claims he made for his supplements. His business interests continued to thrive and grow. Weider himself maintained the physique of a bodybuilder into his late 70s.

The Weiders donated a sculpture of an eagle to the Academy, which uses an eagle in its logo and as its mascot. Today, that eagle is  in the office of Academy Founder, President and CEO Thomas P. Rosandich. They also donated the fitness equipment found today in the Academy’s workout gym. On more than one occasion, Joe Weider came to the Academy and lectured to its students.

Weider accomplished all of this despite dropping out of school in the 7th grade to help earn money for his family. His life was truly an example of how hard work and inspiration can overcome many obstacles and challenges.

Weider died on March 23 in Los Angeles. He was 93. The Academy family mourns the passing of this great entrepreneur and sports figure.