When you reach the age of 20, bursting with innovative ideas and ambitions, you do not decide it might be a good idea to deport your grandfather for being out of date. Yet modern pentathlon, doyen among Olympic sports, seems about to be abandoned tomorrow (Tuesday) by the International Olympic Committee (IOC) Executive Board. Their options are few.

Jacques Rogge, IOC President, or more specifically the Executive Board on the recommendation of the Program Commission, chaired by Franco Carraro of Italy, are committed to reducing the core sports from 26 to 25, for the Games of 2020.

Rumor and speculation are rife that modern pentathlon – the brainchild of founder Pierre de Coubertin, launched in 1912 as being an amalgam of the five disciplines (fencing, swimming, shooting, riding and running) which empowered a cavalry officer – is due to for the chop, being no longer relevant to the 21st century. Paratroopers, don’t fence do they. Coubertin will groan in his grave if it happens.

“It is a very difficult decision, knowing the existing program is a good one,” Tallberg says. “I would have left it for the new president [to be elected in September]. Why should Jacques take on this controversial responsibility, possibly harming his reputation, whereas he could otherwise conclude with his head held high?”

Tallberg is being socially generous, considering that a mutual sailing friend reflects that Rogge has rarely consulted his former sailing colleagues during his presidential years. However, the omens are unpromising for Coubertin’s idealistic test of character, pillar of much that is best in Olympic spirit.

In a poll conducted by the Sport Intern, among more than 60 international voters, including IOC members, IF presidents, journalists and sports administrators,  21 thought modern pentathlon the most vulnerable, deserving to be axed in the light of Program Commission’s (unpublished) survey of 39 aspects, critical among potentially expendable sports. Second least popular was taekwondo (nine votes 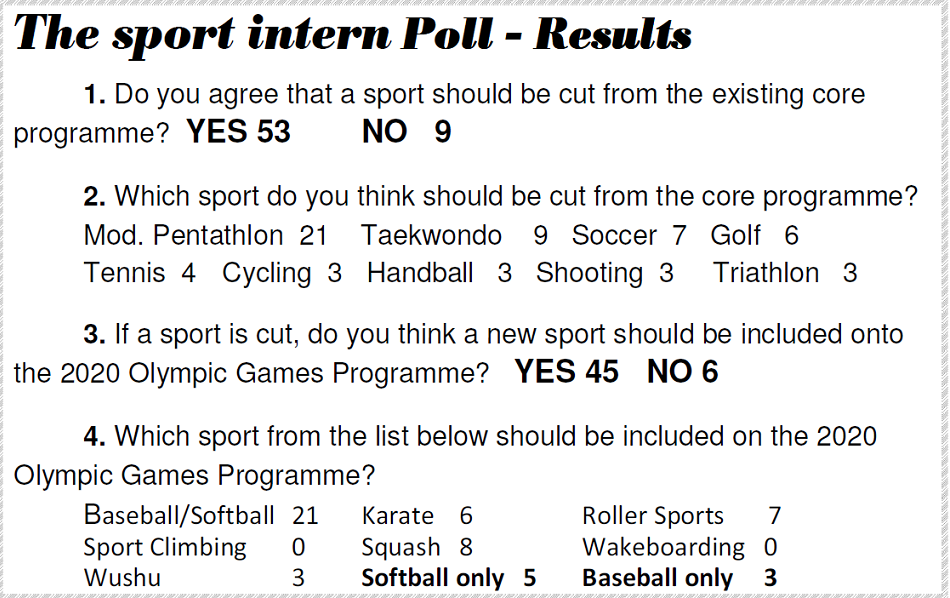 ) ahead of fencing and golf, both six, nevermind that golf has only just arrived for 2016. To leave out football, on seven votes, is unthinkable with the second highest attendance figures. The vulnerability of taekwondo is a surprise, given that its universality was demonstrated at London 2012, with its eight gold medals won by different nations.

The problem for modern pentathlon is that – besides the contemporary military anachronism of fencing – the sport globally attracts low competitor/nation entries, is expensive to stage (though less so, now contracted to a single day) and enjoys only moderate TV rating. Yet some would say that the survival of the sport probably being dependent on remaining in the Olympic fold, this alone is justification for retaining it.

The demonstrable camaraderie which the sport consistently exhibits is a lesson to all. Can Juan Antonio Samaranch, son of the seventh president, a pentathlon official and EB member, convince his colleagues?

There will remain the decision of replacement, to be recommended by the EB at the SportAccord congress in late May then to be ratified by the members at the IOC Session in September. It would be perverse to include pentathlon among those current candidates for entry as non-core sports: baseball/softball, karate, roller sports, sport climbing, squash, wake boarding and wushu. Newly amalgamated baseball/softball, both discarded in 2005 from the London 2012 Games, can hardly now return without making the IOC look silly. Karate is another martial art, while squash, for all its acclaim, would be a fourth racquet game.

In the poll opinion for a new inclusion, baseball/softball drew 21 votes, squash next with eight. Yet are any of them more worthy of Olympic celebration than pentathlon, which itself is surely superior to, say, wrestling: a pair of otters squabbling over a piece of fish.

David Miller can be contacted through the Sport Intern newsletter. The Sport Intern in a blog produced by Karl-Heinz Huba in Lorsch, Germany.  Mr. Huba can be reached via email at ISMG@aol.com.  This article is reprinted here with the permission of Mr. Huba.