Faced with increasing concern about the toll of concussions and confronted with litigation involving thousands of former players, the U.S.  National Football League (NFL) is planning to form a partnership with General Electric (GE) to jump-start development of imaging technology that would detect concussions and encourage the creation of materials to better protect the brain.

According to The New York Times, the four-year initiative, which is expected to begin in March with at least $50 million from the league and GE, is the result of a conversation between NFL Commissioner Roger Goodell and GE’s chief executive, Jeffrey Immelt, a former offensive tackle at
Dartmouth. 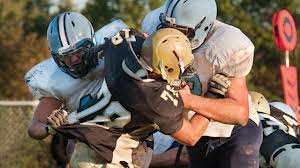 When Goodell explained his idea of getting leading companies in innovation to join the NFL to accelerate research, Immelt said he wanted to help. After years of insisting there was no link between head injuries sustained on the field and long-term cognitive impairment, the NFL has altered rules, fined and suspended players who hit opponents in the head and contributed millions of dollars for the study of head injuries.

Meanwhile, the NFL Players Association (NFLPA) has granted Harvard Medical School a $100 million grant to create a transformative 10-year initiative — the Harvard Integrated Program to Protect and Improve the Health of NFLPA Members. According to an announcement on the university’s homepage, the program will marshal the intellectual, scientific and medical expertise throughout Harvard University to discover new approaches to diagnosing, treating and preventing injuries and illnesses in both active and retired players.

“We are honored to work with the NFLPA to address the health challenges faced by NFL players and so many of America’s athletes,” said Jeffrey S. Flier, dean of the Faculty of Medicine at Harvard University. “We will harness the vast expertise of Harvard Medical School, its world-class affiliated hospitals and Harvard University’s 10 schools to ensure that we make a meaningful difference in the lives of these players through  advances in medicine, science and technology. We are committed to going beyond our walls. We will reach out to other institutions when  necessary, in order to access the resources needed to solve the most pressing medical issues identified by the NFLPA.”

“Our goal is to transform the health of these athletes,” said Lee Nadler, HMS dean for clinical and translational research, Virginia and D.K. Ludwig, Professor of Medicine at Dana-Farber Cancer Institute and director of Harvard Catalyst, who will direct the program. “In order to extend the life expectancy and quality of life of NFLPA members, we must understand the entire athlete, all the associated health risks, and all of their interactions. We refer to this comprehensive approach as the ‘Integrated NFL Player.’ Harvard Catalyst will convene and connect investigators from all disciplines, in all departments, across all of Harvard’s component schools and affiliated hospitals, to work as a single team.”

The Sport Intern is published by Karl-Heinz Huba of Lorsch, Germany.  This article is reprinted here with permission from the author.  Mr. Huba can be reached via email at ISMG@aol.com.