(Editor’s Note—This new book by Evan Weiner is available as an e-book for $2.99 from Smashwords.  It is suited for research purposes and includes quotes from the people who were there, including Lamar Hunt, Tex Schramm, Pete Rozelle, Joe Namath, Art Donavan, Dan Rooney among others.  The book can be ordered at https://www.smashwords.com/books/view/268077).

The National Football League (NFL) is the premier sport in the U.S. But, it was not always that way. Author Evan Weiner takes us back to the days when the NFL was a mom and pop store operation with the players and others who witnessed the league’s growth first hand. The game started in the coal mines in western Pennsylvania and is a multi-billion dollar business today. 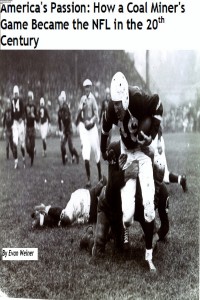 The NFL started in 1920; teams came and went. Stability finally occurred in the 1950s with the arrival of television. Television transformed North American sports. In 1950, baseball, boxing and horse racing were among the most popular sporting events in the country. Within 10 years, football, and in particular, the NFL would begin its ascent, and by 1965 it became the country’s most popular sport.

In the old days, you could find Chicago Bears Owner and Coach George Halas at the Chicago Bears offices in the fall and part of winter. The rest of the year he would be in his Chicago sporting-goods store. Andy Robustelli is a member of the Pro Football Hall of Fame for his work with the Los Angeles Rams and New York Giants. Robustelli was a star with Los Angeles between 1951 and 1955, but requested a trade to New York because he could not be away from his thriving Stamford, Conn., businesses, and the Rams accommodated him. Hall of Famer Artie Donovan once told me his NFL of the 1950s bears no resemblance to today’s NFL.

The NFL was in the right place at the right time. There is not a better television game other than football. A viewer can see everything as it develops on the field, from the line of scrimmage, the quarterback handing off or passing the ball and the receiver catching it. It is an easy game to watch, and it did not hurt that the New York Giants won a World’s Championship in 1956 and played in the “Greatest Game of All Time” in 1958, losing in the NFL Championship game to Johnny Unitas and the Baltimore Colts.

That game started the lasting love affair between Americans and football. The Giants became the darlings of Madison Avenue, led by the handsome Frank Gifford, and football gained acceptance. By 1960, the CBS show “20th Century” hosted by Walter Cronkite caught the football bug. The CBS weekly documentary ran a program titled “The Violent World of Sam Huff.” Huff, the Giants middle linebacker was profiled and fitted with a microphone during a pre-season game to give the viewers an inside look during an NFL game. Fans were brought onto the field, and players became people that fans could come to know and relate to.

The move from the mom and pop operations, the old football families–the Maras in New York, the Rooneys in Pittsburgh, Halas in Chicago–to today’s corporate status, did not come overnight. The NFL had to fend off a rival league between 1946-49, taking in three All American Football Conference franchises in 1950, and continued to be plagued by franchise failures until 1952. The NFL enjoyed some franchise stability beginning in 1953 and started to make plans to expand with the goal of adding teams by 1961.

The Giants-Colts 1958 Championship Game forever changed football. Dallas businessman Lamar Hunt, who struck out in his attempts to move the Chicago Cardinals to his home city, talked to Houston businessman Bud Adams in 1959 about starting a rival league, after Adams failed to purchase the Cardinals and move them to Houston. The new American Football League (AFL) was born, and all of a sudden there was an entirely new league full of teams.

The AFL survived the first couple of seasons, and then its television contract with ABC was replaced by a major new deal with NBC.  NBC was upset that CBS had a monopoly on NFL broadcasts, something made possible by the Sports Broadcasting Act of 1961.  Once NBC provided a new infusion of money for the AFL, the new league began to actively compete for rookie players.  This new reality prompted negotiations between the two leagues that in early 1966 led to a merger of the two leagues and created the framework for the NFL as we know it today, complete with the Super Bowl to decide its champion.

Weiner’s book traces this rapid growth and evolution of the game into the financial machine it is today.  Anyone interested in the history and economics of modern sports will find this book a fascinating read.

Evan Weiner, the winner of the United States Sports Academy’s 2010 Ronald Reagan Media Award, is an author, radio-TV commentator and speaker on “The Politics of Sports Business.” He can be reached at evanjweiner@gmail.com His book, “The Business and Politics of Sports, Second Edition” is available at www.bickley.com and Amazon.com.  This review is reprinted with permission from Evan Weiner.