For high schools across the country one of the most exciting times of the year has arrived. November is the month when the football regular season ends and playoffs begin. As the regular season winds down, many schools face long-time rivals and play games that will determine whether or not they make the playoffs.

But 2012 has seen the continuation of another season related to high school football—the fighting season.

On a recent Friday night in Birmingham, Ala., Jackson-Olin was set to face off against city rival Huffman. The game did not have any particular playoff ramifications. But it was a game between schools on the west side of the city and its eastern edge. 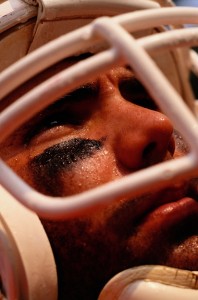 During the third quarter a fight broke out on the field that turned into a brawl. Both benches emptied as players ran onto the field to get in on the action. It took game officials and police 15 minutes to restore order.

At least those two schools got to start the game.  Friday night’s scheduled game in Bessemer just west of Birmingham between Midfield and Bessemer City High Schools was cancelled Thursday by school officials.  A week or so earlier a Midfield student had been shot in an incident involving several young men.  This had led to confrontations between students from the two schools that may have been gang related.  Officials were concerned that there would be violence in the stands or around the stadium if the game was played.  A double forfeit was declared.

It was senior night for Bessemer City where its senior players would have been honored before the game.  Since Bessemer City’s team is not going to the playoffs this ceremony has forever been lost.  Officials at that school are now dealing with angry parents who wanted to see their sons honored.

A quick Google search using the words “high school football fight” turns up pages of results from around the country.  There are stories from October, 2012 of a fight at games in San Bernandino, California and Ann Arbor, Michigan.  In the latter instance, which occurred immediately following the game, the two head coaches were involved and a player who had been on the sidelines using crutches because of a knee injury was seen striking people with one of the crutches.

On the same weekend in September, 2012 there were fights at two different games in Collier County, Florida.  In one instance players from one team went into the stands and engaged fans who had been heckling them.  At another game parents in the stands got into a fight and at least one person wound up being taken to the hospital.

It doesn’t take long to find dozens of reports online of fights at these games.  State high school associations routinely investigate and hand out penalties, which involve suspensions, forfeits, fines and even banning teams from competitions.  Yet the mayhem goes on.

We live in a culture where many times it seems that the way to express one’s viewpoint is to shout down other people and to verbally insult them.  At the same time we hear young people talking about not letting anyone “disrespect them”.  The slightest perceived insult is often met with violence.  Many times authorities are almost relieved if violent confrontations only involve fists and weapons other than guns.

Many of our cities have for several years scheduled high school games for afternoons and weekends when the games would be played before darkness fell.  Some cities take steps to limit ticket sales and employ security measures, including the use of metal detectors at game sites.  School leaders try to implement programs designed to foster good sportsmanship.  Rules committees implement penalties for excessive celebrations to try and avoid situations where one player taunts opponents.

Yet violent incidents continue to occur and seem to happen with greater frequency.  We recoiled in the 1990s when we watched on TV incidents of soccer hooliganism unfold across Europe.  We shake our heads at the need for anti-racism programs in the present in European soccer leagues.  Yet in the U.S. there is far more violent behavior at high school sporting events than at pro or college events.

What does it say about our culture when so often young people and adults cannot control themselves at high school games?  What does it say about the culture of mob rule when hundreds of people become involved in these fights?  Why is violent behavior seen in many circles as an effective problem solving tool?

The ESPN 30 For 30 documentary series just premiered a film focusing on the violence in 1962 at Ole Miss when James Meredith integrated the school, and on the interplay between these events and the success of the Rebels’ undefeated football team that finished ranked 3rd in the country.  We watch film of the riots on that campus on Sept. 30, 1962 and give thanks that those days are gone.   Yet things happening on football fields across the country today raise the question of whether things have really changed in some respects.

High school football has seen a decline in participation over the past 10 years.  Much of this is attributed to the soaring cost of fielding teams and the declining monies going to public education.  It seems that a legitimate question is whether or not the violence we see at our games will at some point lead to the discontinuation of football at many schools.  Such an outcome could have significant social consequences in many communities.

It is past time that we admit that a serious problem exists and start to seriously look for solutions.  Football may be a violent game; but the physical contact must be limited to the playing of the game and not to injuring opposing players, coaches and fans.

Greg Tyler is Director of Library/Archivist at the United States Sports Academy. Tyler has also taught courses at the Academy in sports law. He served as a coach, league administrator, and soccer referee in youth sports for many years. He has a law degree and practiced law for a number of years.