When Olympic champion Serena Williams beat Maria Sharapova in the final of the Istanbul 2012 WTA Championships, Istanbul’s Olympic bid leaders got enthusiastic about another demonstration of the city’s capacity to host elite international sporting events.

“I’ve said it throughout the tournament, that this has been the best WTA Championships I’ve been a part of,” said Olympic silver medalist Maria Sharapova. Serena Williams, the tournament winner and gold medalist at London 2012, adde: “The Turkish fans here are so amazing, so nice and so supportive. I’ve never seen so many signs with my name on them. I can’t even explain how that makes me feel.” 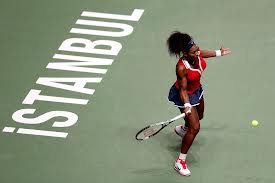 Poland’s Agnieszka Radwankska, the country’s flagbearer at the London 2012 Opening Ceremony, said: “Istanbul is a very big city and has plenty of opportunities. This tournament has always been sensational. These kinds of events add huge plus value to the country. If Istanbul gets the chance to host the Olympic Games, this will be good for the country as well.”

Just weeks after Rory McIlroy and Tiger Woods competed at the Turkish Airlines World Golf Final, and with the Intercontinental Istanbul Eurasia Marathon and the FINA World Swimming Championships on the horizon, the world’s top eight women’s tennis players gathered in Istanbul’s Sinan Erdem Dome—Europe’s third largest multi-purpose indoor venue and the proposed venue for the Olympic basketball in 2020. Serena Williams took the title in front of a vibrant capacity crowd of 16,410—a record attendance for the tournament’s two years in Istanbul.

“Istanbul continues to prove itself as a trusted host city for international sporting events. This year alone, the city has hosted numerous major sporting competitions demonstrating that it is a city that is not only passionate about sport, but one with proven experience in providing the optimal athletic conditions for Olympic-standard athletes to perform,” said Istanbul 2020’s bid leader, Hasan Arat. Ugur Erdener, President of the Turkish NOC, added: “I am proud to witness Turkey’s growing reputation as a home for women’s sport, and I truly hope that my country will be supporting athletes like our own Çaðla Büyükakçay in eight years’ time at a home Olympic and Paralympic Games.”

This year’s tournament registered the highest attendance in 13 years, with an aggregate audience of over 72,000 and an average of over 12,000 per session. The Championships also set record broadcast and digital audience milestones: 500 hours of championships action were broadcast to 167 countries through 22 international TV broadcasters, giving this tournament the widest reach in WTA history. It is estimated the competition delivered over $100 million worth of global media value and more than $40 million of economic impact to Istanbul.