Recent information collected by the NCAA’s Injury Surveillance Program indicates that the rate of football related concussions has remained steady over an eight-year period, even as efforts have been made to recognize and record a broader range of head injuries.

During the 2011 football season, 2.5 concussions were reported for every 1,000 game-related exposures − the periods of athletics-related activity when injuries can occur. Even though there has been a decline in concussion rate since 2004, the difference in year-to-year variability is not statistically different at this point.

A concussion is a brain injury that may be caused by a blow to the head or elsewhere on the body with an “impulsive” force transmitted to the head.  They can result from hitting a hard surface, such as the ground or collision with another player, or from the head striking a helmet, elbow, or knee. 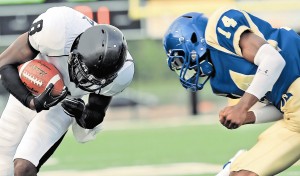 Concussion rates in football had been escalating over a 21-year period beginning in the early 1980s. But the trend stabilized in recent years, becoming relatively flat from 2004-12. NCAA Director of Health and Safety David Klossner said the reasons for the previous escalating trend  are not well documented but could be due to multiple factors, including improvements in the detection and clinical management of concussion.

Concussion rates in all fall sports in 2011 − including soccer, field hockey and volleyball − mirrored the football findings, with 1.9 concussions reported for every 1,000 exposures. Those numbers also fell within the range of concussions reported during the eight-year period.

Recent efforts to address concussions through NCAA legislation, education and playing rules have helped NCAA institutions better recognize and treat concussions. Yet the rate of reported concussions has remained steady despite that heightened awareness.

“Given the increased awareness and sensitivity to concussions by coaches, athletes and medical staff over the last few years, a level rate of concussions is encouraging as we anticipated a spike in the data set,” Klossner said. “Although we do not yet have enough information to draw final conclusions, these data are important to monitor trends as we strive to make competition and practice safer for our student-athletes in all sports.”

After recording 532,202 football athlete exposures during games in the 2011-12 season, the largest sample of exposures analyzed during the eight-year period, the rate of concussions remained within the range recorded from the previous seven seasons. Nearly 1.85 million athlete exposures were observed in all fall sports competitions during that same period, and the overall rate was 1.9 concussions per 1,000 exposures, though it varied across sports.

The information gathered by the Injury Surveillance Program is used to provide a national systematic approach to track injury occurrences and help the NCAA and its members make informed decisions on sport rules and injury treatment to protect the health of student-athletes. 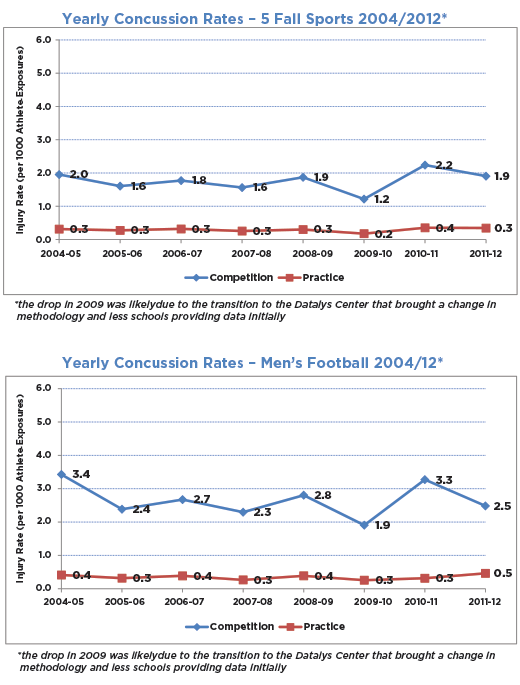 This story first appeared on the NCAA.org website on Sept. 21, 2012.  It is reprinted here with permission from the NCAA. Brian Hendrickson is a contributor to NCAA.org and can be reached at brihendr@iupui.edu.