It was recently reported that football players at the University of North Carolina made up over one-third of the total students enrolled in questionable classes taught in a department that the university itself has recently investigated for academic fraud.

The school said the football players represented 246 of 686 enrollments (36 percent) in the 54 courses within the Department of African and Afro-American Studies between summer 2007 and summer 2011. Those classes lacked appropriate supervision and were called “aberrant” or were “taught irregularly” with limited contact between instructors and students, according to a university report.

There were also 23 enrollments by UNC men’s basketball players during that same period of time.  That number represented 3% of the total number of enrollments.

The News and Observer of Raleigh first reported the athlete enrollment figures in early May.  The school’s investigation found fraud and poor oversight, including unauthorized grade changes and reports of grade rolls with what appear to be forged faculty signatures. The report found no evidence of favorable treatment for student-athletes or grades awarded without written work.

One of the classes was a class taught in a Swahili course.  That course was taken by a UNC football player named Michael McAdoo, who was implicated in the recent NCAA investigation of the school’s football program.  The investigation also found that McAdoo had recent impermissible tutoring and that he had turned in a final paper in that course that was later found to have been heavily plagiarized. 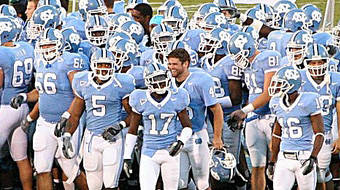 The administrator, Deborah Crowder, worked under Nyang’oro and wouldn’t talk with school investigators. UNC found no aberrant courses or unauthorized grade changes after her September 2009 retirement, the report stated.

UNC Chancellor Holden Thorp had originally expressed confidence in the department chair.  He later admitted that he could not recall a more serious case of academic dishonesty and said it was a major blow to the university’s reputation.

UNC’s football program spends a lot of money on academic support for its student-athletes.  It is difficult to believe that then-coach Butch Davis and his staff did not have some idea of what was going on.  A similar situation came to light about a decade ago at the University of Georgia involving men’s basketball players.  Coach Jim Harrick and his son, an assistant coach, were ultimately fired over that incident.  Similar problems occurred back in the 1990s at the University of Minnesota under Coach Clem Haskins.

In the past five years, 11 of the 24 current members of the Southeastern and Atlantic Coast Conferences have seen their football or men’s basketball programs come under NCAA investigation.  In addition, programs at pending ACC member Pittsburgh and SEC member Florida have suffered through news reports of criminal behavior by scores of football players.

So, 14 of the soon-to-be 28 schools in those conferences have had publicized problems in the past few years.  It’s difficult to argue that all of these problems are not the norm at schools in these conferences.  The bad news just never seems to stop coming.

It appears that at least half of UNC’s football and men’s basketball players between 2007 and 2011 enrolled in at least one of the suspect courses.  It is difficult to believe that it was not common knowledge on campus that there were easy grades to be had by enrolling in courses that required little or no real work.

At what point will fans of college sports step forward and say they have had enough and then demand change in the system?  College sports seem to lurk somewhere between troubled and corrupt. Is the entire system about to fall in on itself?