Will Heininger suffered in silence.

The 2011 Michigan graduate was a defensive tackle on the school’s football team and a four-time Academic All-Big Ten winner. Despite playing Division I football at a storied program and thriving at one of the nation’s most prestigious public universities, Heininger quietly battled depression. He hid the affliction from his teammates, friends and coaches.

His story is not uncommon. Roughly one in five American youths suffers from some sort of mental health disorder. Mental illness rates among 18-to-25 year olds are twice that of their middle-aged counterparts. So among a pool of 450,000 NCAA student-athletes, it’s certain that many, like Heininger, are struggling with depression and other diseases. 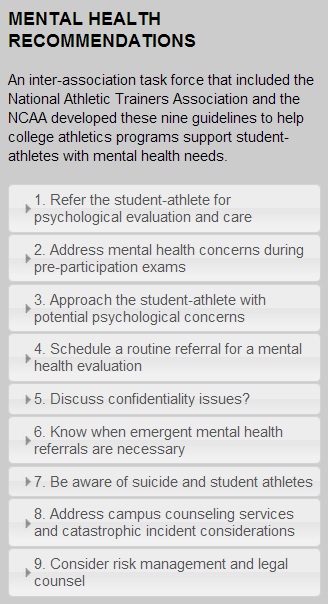 Eventually, Heininger turned to his athletic trainer, who worked with his coach and team physician to get him help. They connected him with a social worker who helped him turn his life around. The National Athletic Trainers’ Association (NATA), the NCAA and other health and mental-health organizations want more student-athletes who are dealing with psychological issues to follow Heininger’s lead. So today at the NCAA’s Indianapolis headquarters, a 10-member inter-association task force, led by NATA, announced nine guidelines to help athletics trainers, coaches, team physicians and other athletics administrators work with student-athletes who are living with psychological issues.

“Mental health disorders are an under-recognized and undermanaged condition in our country, and college students are particularly vulnerable,” said Dr. Brian Hainline, NCAA chief medical officer. “Student-athletes are not immune to mental health problems, and can suffer from some unique stressors.”

The task force’s recommendations will be published in greater detail in this month’s edition of the Journal of Athletic Training, and are designed to provide a clear road map to address the mental challenges student-athletes face, according to Timothy Neal, assistant director for sport medicine at Syracuse and chair of the task force.

“The probability of encountering one or more student-athletes with psychological concerns within an athletic department is a certainty,” Neal said in a statement released by the NATA. “Our goal is to immediately address and care for the student athlete with the best protocols in place.”

The announcement was hailed as a major step to addressing the issue of student-athlete mental health, which in recent years has prompted athletics programs to devote more resources to psychological support.

The guidelines were presented as developmental steps for athletics programs to institute a plan for recognizing and referring student-athletes with mental health concerns.

“These recommendations are a leap forward in providing a safe and sound environment for student-athletes who may be suffering from a mental health disorder,” Hainline said. “As athletic trainers so often serve as the primary health care provider for student-athletes, this consensus paper provides the foundation for a management plan that is evidence-based, confidential, free of conflict-of-interest and is valuable to everyone who works with the student-athlete.”

This story first appeared on the NCAA.org website.  It is reprinted here with permission from the NCAA.