New research suggests that chronic traumatic encephalopathy (CTE), a brain disease associated with repeat brain trauma including concussions in athletes, may affect people in two major ways: initially affecting behavior or mood or initially affecting memory and thinking abilities. The study appears in the August 21, 2013, online issue of Neurology®, the medical journal of the American Academy of Neurology. CTE has been found in amateur and professional athletes, members of the military and others who experienced repeated head injuries, including concussions and subconcussive trauma. 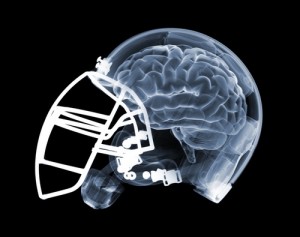 “This is the largest study to date of the clinical presentation and course of CTE in autopsy-confirmed cases of the disease,” said study author Robert A. Stern, PhD, a professor of neurology and neurosurgery at Boston University School of Medicine. “However, the overall number of cases in the study is still small and there may be more variations in CTE than described here.”

For the study, scientists examined the brains of 36 male athletes, ages 17 to 98, diagnosed with CTE after death, and who had no other brain disease, such as Alzheimer’s. The majority of the athletes had played amateur or professional football, with the rest participating in hockey, wrestling or boxing.

Stern noted that the findings also should be viewed with caution, as there was no comparison group of former athletes without CTE in the study. In addition, families choosing to participate in the study may have been more likely to witness more severe symptoms than those not participating, which could have affected the results. Stern also added that these findings suggest that the diagnosis of dementia in older individuals with a history of repeat brain trauma may be difficult because many of the symptoms of CTE are similar to other diseases such as Alzheimer’s.

The study was supported by the National Institutes of Health, the Department of Veterans Affairs, the National Operating Committee on Standards for Athletic Equipment, the Sports Legacy Institute, the National Football League (NFL) and the Andlinger Foundation.

The neuropathological examinations were conducted by Ann McKee, MD, professor of neurology and pathology at BUSM. McKee and Stern were co-founders of the Boston University Center for the Study of Traumatic Encephalopathy, along with neurosurgeon Robert Cantu, MD, and Christopher Nowinski, Executive Director of Sports Legacy Institute.

The American Academy of Neurology, an association of more than 26,000 neurologists and neuroscience professionals, is dedicated to promoting the highest quality patient-centered neurologic care. A neurologist is a doctor with specialized training in diagnosing, treating and managing disorders of the brain and nervous system such as Alzheimer’s disease, stroke, migraine, multiple sclerosis, concussion, Parkinson’s disease and epilepsy. For more information about the American Academy of Neurology, visit http://www.aan.com or find us on Facebook, Twitter, Google+ and YouTube.