The National Football League (NFL) should be in public relations crisis mode. There probably has never been a 24-hour period in the league’s 93-year history where two players have been kicked off of their teams because of a murder charge and an attempted murder charge. But, the league’s biggest problem is that Woody Johnson’s New York Jets franchise remains circus-like as the team’s quarterback Mark Sanchez was caught on tape having some fun dancing and apparently dropping his pants or something that 20-somethings might do having a good time. 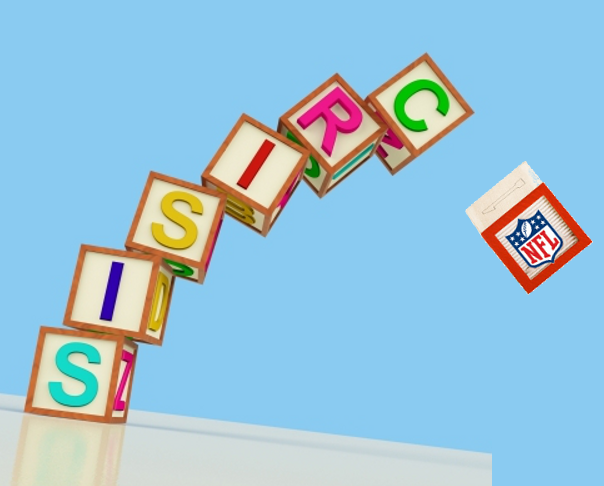 But in the tony, upscale village of Bronxville, New York at the local Starbucks, two football fans, an elderly white fan and a middle-aged black man were talking about football. These are the people of means who could buy tickets or go to games because their corporate bosses buy tickets and give them out to employees. The middle-aged man said that’s how he attends games, as he gets his tickets free from his bosses.

Mark Sanchez’s little dance and the accompanying nonsense from the tabloid mentality media didn’t bother them in the least. It was “that Herman guy” in New England that caught their attention. “That Herman guy” was arrested for murder.

The conversation between the two men was fascinating, because one of them without prompting told the other that he thought, “Herman or something with an ‘H’ was fired because they (the New England Patriots) were protecting their image and had to do something.”

The man got the name wrong, it was Aaron Hernandez, but he was 100 percent correct in his assessment of the situation. New England and the NFL were in damage-control crisis mode.

The league has been hard hit with arrests since the Super Bowl. According to the San Diego Times Union NFL Arrests Database, there have been 30 incidents where 29 players who were on NFL rosters or players connected to the NFL in the past year have been charged. An unemployed player Titus Young has been arrested twice. The charges range from assault to drunken driving.

Hernandez, of course, has been charged with murder and five weapons counts in connection with the killing of Odin Lloyd. Cleveland fired Ausar Walcott, who last week was charged with attempted murder after he allegedly punched out a man in a New Jersey nightclub.

The “Shield”, the NFL logo, should be taking a tremendous hit in image with the arrests of Hernandez and Walcott for very serious crimes. But, you wonder when you read tripe about the New York Jets and the “circus” atmosphere because the team’s record was at best mediocre in 2012 and the quarterback Mark Sanchez had a bad year.

Day after day, the New York tabloids and ESPN attached the “circus” label on the Jets. The general public bought the notion created by the mythmakers. The Jets record was mediocre and the media pushed the story while ignoring real problems in the real world that collided with the NFL fantasy world. There was a murder-suicide in Kansas City involving Jovan Belcher. Belcher allegedly killed the mother of his child and then committed suicide in front of Kansas City Chiefs officials near the team’s campus in December.

There was a DUI-manslaughter charge involving a Dallas Cowboys player. Joshua Brant was arrested following a car crash that took the life of his teammate Jerry Brown. After being released from jail, Brant was on the sidelines cheering on his Cowboys teammates.

Despite all of this, the New York tabloids and ESPN insisted that there was a Jets circus.

The real “circus” in the Jets camp is something the New York tabloids and ESPN aren’t covering too heavily. The team has had three players arrested in the off-season. Two were fired following their arrests (Claude Davis and Cliff Harris). Both were taken in for marijuana possession. A third, running back Mike Goodson who somehow did not make the San Diego Union Times database, was charged with drug possession and a weapons charge. Goodson is still employed with the Jets.

The media inflicted “circus” tag is inappropriate, ill advised and is a product of lazy journalism driven by a tabloid mentality as New York media seems to want to emulate the financially strapped New York Post.

The franchise hired Tim Tebow who became the central character in this so-called circus. Tebow could not perform but the story continued because the mentality ‘it sells newspapers’ exists in the New York market. Of course, that is not the case as both the New York Post and New York Daily News have lost 10 percent of the readership and both papers have laid off employees. The New York market’s Newark Star Ledger, a paper that covers the Jets, may not last until the end of the year.

The Jets franchise is a “circus” but it was not the only New York area NFL team to have a player associated with the team in 2012 or on the 2013 roster arrested. The mighty and well-respected New York Giants were tarnished with the arrest of Michael Boley on February 8 on child abuse charges. The only good thing about this from the Giants and the NFL’s viewpoint was that Boley was fired from the team three days earlier.

The Jets had a fourth player arrested, which seemed to be unnoticed by the circus attendees, the tabloids and ESPN. Bryan Thomas was taken into police custody on October 31, 2012 and charged with assaulting his wife and in possession of drugs. Thomas, who is a free agent, was arrested again in April and charged with beating his wife.

But, Mark Sanchez’s butt makes him the butt of the national media jokes.

The two men sitting in the Bronxville Starbucks didn’t know about Walcott. But, they did known about the initials CYA or Cover Your Ass. That is what Patriots owner Robert Kraft and Cleveland Browns owner Jimmy Haslum are doing.

By the way, Haslum also has the NFL in a dither and has some explaining to do to the courts. Haslum’s Pilot Flying J Company was raided by FBI officials and the Internal Revenue Service in April as part of an investigation into the company’s business practices. It has been alleged that Pilot Flying J had been engaged in rebate fraud. The case is ongoing.

Much has been said about Robert Kraft’s New England Patriots being the “gold standard” of NFL franchises and it could be argued that Kraft has replaced the New York Giants late owner Wellington Mara as the “conscience” of the league.

But, John Madden’s quote of “winning is a great deodorant, it covers everything” may be applicable in the Patriots’ situation. The team wins so the warts are overlooked.

When Goodson was arrested, the New York tabloids questioned whether or not the new man at the Jets helm, John Idzik, did a thorough job of researching Goodson’s character when Idzik hired him.

That doesn’t apply to New England. This may be a minor point, but the good looking, white Super Bowl champion quarterback with a model wife has an illegitimate child. Black players with illegitimate children are always noted and signaled out, like the Jets Antonio Cromartie.

The Patriots coach Bill Belichek is no angel. He had a valid contract with the Jets in 2000 and quit as the “HC” of the team. He ended up in New England. One day, the whole story will probably come out on Belichek quitting and ending up in New England. Then, NFL Commissioner Paul Tagliabue gave the Jets a first-round draft choice from New England at assuage the team.

Belichek, in 2007, was hit with a $500,000 fine, the team with a $250,000 fine and a first-round pick in 2008 for video taping Jets defensive signals, which is against league rules. His personal life is also mixed. He was named in a divorce case as a person who broke up a marriage. His sons have been arrested on minor charges. He has a history of hiring players with questionable character.

Yet, it is all perfectly good in the “Patriot Way” of doing things.

Last year, the team hired Dante Stallworth, who had spent time in a Florida jail following a DUI manslaughter charge. Aqib Talib has an impressive rap sheet. He allegedly assaulted a taxi driver in 2009 and in 2011 allegedly fired a gun at his sister’s boyfriend. Kraft’s team took Alfonzo Dennard in the 2012 draft about a week after punching a police officer. Dennard did 30 days jail time.

Kraft’s team hired Albert Haynesworth in 2011 a number of months after Haynesworth was fired by Washington. Among the police blotter incidents that Haynesworth rang up was an arrest for punching a motorist in the face because of a road rage incident and a bad accident caused by driving 100 mph that left a motorist paralyzed.

Brandon Spikes in 2010 was suspended for violating the league’s drug policy.

In 2005, Belichek hired Corey Dillon, a good running back, who had an assault on his wife charge in 2005.

In the Bill Parcells days, Kraft fired Christian Peter, a drafted player, before Peter ever stepped onto the field with the Patriots. Peter had a history of physical abuse of women while in college.

Kraft has carefully crafted the Patriots brand and image, and winning certainly has camouflaged the dark and seedy side of his business. Kraft too is not exactly a paragon of virtue to Patriots fans. He attempted to move the team out of Foxboro because of stadium problems and was eyeing Hartford as a possible destination.

In 1998, Kraft had a deal with Connecticut Governor John Rowland to relocate the franchise to Hartford. Rowland was going to build the stadium with state money and give Kraft 90 percent of the revenue generated in the building and build a hotel on the property and not pay any property taxes. A sweetheart deal to be sure. But, Kraft pulled out of the deal two days before he would have had to pay a buyout fee because of “environmental” concerns. Massachusetts taxpayers kicked in $75 million, and there were other incentives for Kraft to build his own factory or stadium in Foxboro.

The apologists, sportswriters and fans will find some justification and anoint Kraft as some sort of hero. Same with Haslum, after all, it is football and the fans can overlook all of the problems. Mark Sanchez is the butt of jokes, the target of lazy writers and a tabloid mentality. ESPN thought it could bring eyeballs to its SportsCenter franchise with wall-to-wall Jets and Tebow coverage.

The NFL has to take a deep look at the business and ask: can we survive with all the bad behavior. But, it’s not that difficult a problem. Americans love football and once training camp starts, Belichek will intimidate timid sportswriters as kickoff time approaches. The NFL (and college football) has a stranglehold on men.

Not much will change.

Evan Weiner can be reached at evanjweiner@gmail.com . His e-book, “The Business and Politics of Sports, Second Edition” is available at www.bickley.com and Amazon.com and his e-books, America’s Passion: How a Coal Miner’s Game Became the NFL in the 20th Century, From Peach Baskets to Dance Halls and the Not-so-Stern NBA and the reissue of the 2005 book, The Business and Politics of Sports are available at www.smashwords.com, iTunes, nook, versent books, kobo, Sony reader and Diesel.