There is an important battle being fought in the California Legislature that relates to the issue of health care for retired NFL players, particularly those who retired prior to 1993.

Those former players are not officially represented by the National Football League Players Association (NFLPA).  There was an effort by a group of these former players to get involved in the labor dispute between league owners and the NFLPA in 2011.  These former players, led by men such as George Visger, Dave Pear and Carl Eller, argued that the NFLPA could not effectively represent the interests of all retired players because its members are current players.

Carl Eller, in fact, filed a lawsuit in federal court in Minneapolis against the NFLPA. The lawsuit claimed that current players had unjustly enriched themselves in negotiating the latest labor contract with the league.  Eller argued that since the league had decertified so that Tom Brady and other named plaintiffs could file an antitrust lawsuit in Minneapolis in the summer of 2011 that the union could not negotiate a contract that dealt with retiree benefits. 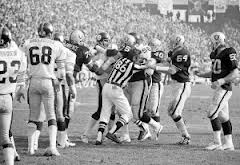 The lawsuit alleged that in the early stages of negotiations in 2011 between the league and the NFLPA former players had been promised that their interests would be included in any settlement.  This was not done and the lawsuit estimated that former players were improperly denied between $100 and $500 million in benefits.

The federal judge, Susan Richard Nelson, dismissed the lawsuit in May 2012.  She ruled that the NFLPA had no legal obligation to negotiate for anyone other than its membership.  She rejected the argument that the decertification move by the union meant any subsequent agreement reached with the league should be null and void.  She wrote that she sympathized with the former players, but they had no legal right to post-career benefits—at least not by taking money from current players.

The ruling was appealed to no avail.  And, so we come now to 2013 and the California legislature.  The Insurance Committee of the California Assembly unanimous reported out a bill (AB 1309) for full debate by both houses that would make changes to California’s Worker Compensation law.  The current law has a loophole that has been exploited in the last decade by a number of former players who have filed successful claims for Workers Comp benefits.

It seems that in California, a professional athlete who only temporarily competed in California, even if for a visiting team, can come back years later and file a claim citing so-called “cumulative trauma” injuries.  This has been applied to all professional team sports.  Players can come in years after their retirement and file claims.  California judges have liberally interpreted the statute of limitation on such actions, ruling that some injuries that only manifest themselves over time only become apparent years after an athlete has retired.

These claims do not have to be based on a specific injury, as is typical in Workers Comp cases.  A number of former NFL players appeared in Sacramento, Calif., last week in an unsuccessful effort to persuade members of the Insurance Committee to kill the bill.

Among those present was Nolan Harrison III, the Senior Director of the NFLPA’s Former Players Services.  Long-time critics of the NFLPA and its attitudes towards players, who retired prior to 1993, including Georg Visger and Dave Pear, were not present that day.  This led to a somewhat scathing attack on these players by Mr. Harrison in a press conference held after the committee vote.  That in turn prompted a written response from Dave Pear, who publishes a blog that advocates for these former players.

It is interesting to contemplate the differing opinions here.  Mr. Pear basically argues that NFL teams have plenty of money and the best way to take care of former players with long-term health issues is for the teams to do it, not the state of California.  He points out that under Workers Comp law, a person who wins a claim only gets medical benefits directly relating to the specified injury/disability.  Many former players suffer from a variety of ailments, some of which might not be covered under a Workers Comp settlement.