“Along with death and taxes, add spiraling sports costs to the certainties of life,” Michael McCarthy opens his Advertising Age commentary, reviewing the U.S. TV sports market and the advertisers growing concern.

”During good times and bad for advertising, prices keep climbing for the ultimate reality TV: live sports,” says McCarthy. “But recently companies like DirecTV are pushing back against rights fees and marketers like Anheuser-Busch InBev are struggling with ways to justify them, it raises the question: Can sports continue to defy gravity?” 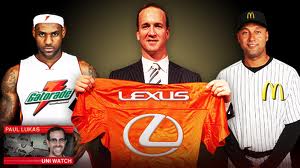 “Reliant on dependable ratings winners at a time when nothing else is a sure thing, TV networks and cable and satellite operators are shelling out double, or more, what they used to spend to carry live games from the National Football League, Major League Baseball, the National Basketball Association, Nascar, college football and basketball and other sports,” the commentary continues.

McCarthy adds some figures: Starting in 2014, Major League Baseball will roughly double its annual payday thanks to national-TV renewals worth $12.4 billion with ESPN, Fox and TBS. After the 2014 regular season, ESPN will pay an estimated $7 billion to televise college football’s new national playoff through 2026. Time Warner Cable will spend an estimated $8 billion over 25 years to create a
new regional sports network around the Los Angeles Dodgers.

Addressing the recent World Congress of Sports conference last week in Naples, Fla., Blaise D’Sylva, vice president media, sports and entertainment marketing with Anheuser Busch, called for leagues to play fewer games. The problem is not that “there are too many sports. There’s just too much of any sport,” said D’Sylva.

This article first appeared in the blog, The Sport Intern. The editor is Karl Heinz-Huba of Lorsch, Germany. He can be reached at ISMG@aol.com. The article is reprinted here with permission of Mr. Heinz-Huba.