There has been much well-informed discussion at this week’s two-day “Tackling Doping in Sport” global summit, where the great and good of the world’s anti-doping community have gathered to exchange views in rooms within Twickenham Stadium.

Some of it, I’ll be honest, has gone a little over my head, particularly in the detailed, legal discussions around the revised code upon which the World Anti-Doping Agency (WADA) is currently cogitating.

But what has come through, regularly, is the sense that all this talk is based in some very deep and primitive notions – notions of justice, notions of tribal loyalty.

The last two are profound influences upon human development, rooted deep in all of us at the instinctive level. And as they apply to sport, they have the kind of leverage you might expect. And they can often compromise each other.

During his address to the conference, Rob Koehler, WADA’s Director of Education and Programme Development, cited research conducted by Dr. Sharron Stoll of the University of Idaho, named in 2007 as one of the 100 Most Influential Sports Educators in America, as part of her work with the Center for Ethics. 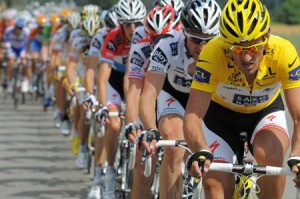 This research involved assessment of moral reasoning among grade six students, and following up with the same students six years later to compare development between those who had pursued a sporting career and those who hadn’t.

Speaking as someone who has spent many of his happiest times involved in team sport, I can only agree with this analysis. When I think back to the way I acted and spoke to officials – it’s just come back to me, South West Herts Youth League, kicked an opponent, was sent off and, as the referee’s report vouchsafed, gave my name as “Mickey Bloody Mouse,” for all of which I got a three-week ban – I shudder. I would not have acted like that as an individual. I would have been mortified to have done so. But when you are part of a team, it’s different. And when your teammates err or transgress, you back them up. It’s tribal.

This is one of the most important instincts currently militating against the drive to clear sport of doping cheats. As Koehler reported, athletes use a variety of means to accommodate themselves with the notion of doping. There is a strong tendency towards euphemism. Rather than using words such as steroid, for instance, other terms, such as “juice,” are employed. Other tactics involve comparing doping transgressions with the transgressions of others: “They drink, they smoke pot, they are doing a lot worse than me.”

Then there is the classic cheater’s retreat – everyone else is doing it, so why don’t I? And, on occasions, that expands into a denial of the evidence that doping use of steroids or EPO can seriously harm one’s health. It’s all been exaggerated.

But beyond that, particularly within groups of male athletes – a sprint training group, perhaps, or a richly sponsored cycling team – there is the instinct, as Koehler put it, not to rat out your mates. Such, patently, has been the story behind the recent seismic revelations about the culture of doping in which Lance Armstrong and so many of his fellow cyclists in the US Postal Service team operated.

Part of the conference was given over to a specific consideration of amnesties, from a historical and pragmatic point of view. Mike Morgan, a senior associate with the legal firm Squire Saunders, the summit sponsors, led the conference through some of the earliest recorded amnesties – in 403BC, for instance, the Greeks accorded an amnesty to the Spartans, while Abraham Lincoln also offered an amnesty to the Confederate forces, top brass aside, towards the end of the American Civil War.

On the subject of sporting amnesties, Morgan laid out the main arguments for and against. Arguments against included the following: amnesties run counter to one of the prevailing ethics of WADA, namely harmonization; they set a potentially dangerous precedent, inviting a never-ending sequence of similar demands; if offered within one sport, such as cycling, they are unfair to athletes in similar positions in other sports facing sanctions for the same offenses; and finally, they can be seen as creating a “rogues’ charter” whereby all manner of misbehavior can be swept under the carpet and forgotten, with the miscreants getting away “scot-free.”

On the other side of the argument, an amnesty might deal swiftly with the mass of cases now emerging within cycling, which might otherwise continue to drip-feed into the public consciousness as they are dealt with singly; full disclosure through a time-limited amnesty could clear this up, and make a significant reassuring marker in terms of public perception; information gleaned might be beneficial to a wide range of other sports seeking to combat doping – indeed, this might be the only means of obtaining such information.

For any amnesty to work in, say, cycling, the following conditions would probably need to be obtained: an independent managing body, no sanctions within a specified and limited time period, commitments from teams not to fire those cyclists who speak out, and an agreement from those granted the amnesty that any further doping would be an offence.

But there are other potential problems if an amnesty goes ahead – in cycling, for instance, there would be the risk of those speaking out becoming liable to civil or criminal lawsuits given that countries such as Spain, Italy, Greece and Belgium have criminalised doping. There would also be the question of how team sponsors might react to a bout of truth-telling.

Jaimie Fuller, chairman of the sports clothing firm SKINS and a founding force in Change Cycling Now – the pressure group including figures such as three-times Tour de France winner Greg Lemond, which has been calling for urgent change within cycling’s international governing body, UCI – is passionate in championing the idea of an amnesty in the sport. If the ills of cycling are not purged now, Lemond believes, the sport will suffer “death by a thousand cuts.”

He adds: “We have to embrace these guys. Otherwise, we are going to be three steps behind [the dopers]. That is where we have always been.”

As Morgan succinctly puts it: “This is a tricky issue. There is no obvious solution.”

What is going to be a sufficiently powerful force to make any amnesty work – to erase or dam the fear within cyclists who have doping issues to confess? What could be stronger than the primal instinct to draw together with your teammates in facing the outside world?

What could it be? The true spirit of competition – which is the phrase with which Fuller’s company has become associated across a range of sports? It would be nice to think so. But it hasn’t yet happened.

What else, then, is a sufficient lever to allow us, as it were, to lance the boil?

Well, for all the studied frankness of Armstrong’s responses during his TV confessional with Oprah Winfrey, it was only when he discussed how his son had been getting into fights at school defending his dad’s honor that the carapace cracked and real emotion emerged from the disgraced champion.

At the risk of echoing the wailing woman in “The Simpsons” – “Won’t somebody PLEEASSE think of the children??!!!” – you have to ask: can we not sort this sickness out, now, on behalf of the generations about to embrace the potential beauties and accomplishments of sport? Surely we owe it to them, and ourselves, to do so.

This column first appeared in insidethegames.biz and is used here with permission. Mike Rowbottom covered the London 2012 Olympics and Paralympics as chief feature writer for insidethegames, having covered the previous five summer Games, and four winter Games, for The Independent. He has worked for the Daily Mail, The Times, The Observer, the Sunday Correspondent and The Guardian. Follow him on Twitter @rowbo1.