Since the President Ronald Reagan administration succeeded in getting a tax bill passed in 1986 that provided a vehicle for professional sports teams to realize tax subsidies when local governments financed new stadium construction, there has been a building boom involving new sports facilities largely at taxpayers’ expense. In many instances, financial projections were overly optimistic and state and local governments have wound up having to assume enormous debt to pay off construction costs.

As recently as 2012, voters in Minnesota approved a public-private financial package to construct a new stadium for the National Football League’s (NFL) Minnesota Vikings. Just in the past five years, the cities of Miami, New Orleans, Brooklyn, N.Y., and Oklahoma City, Okla., have seen new venues open that are heavily subsidized with public monies. Both the New York Yankees and Mets got new stadiums in New York City through the generosity of public monies. 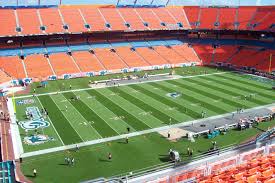 It was announced just last week that a tentative agreement has been reached in Atlanta that will use taxpayer dollars, mostly from hotel/motel taxes, to pay at least $200 million towards the construction of a new stadium in the downtown area for the Atlanta Falcons football team. This deal is moving forward despite the fact the Georgia Dome, where the Falcons currently play, is only about 25 years old.

This building boom may be coming to a screeching halt as the willingness of taxpayers to foot the tab for lavish stadiums for rich owners seems to be waning. In the Miami area, the Marlins of baseball’s National League moved into a new stadium last year that was built on the site of the old Orange Bowl stadium. The controversy surrounding cost overruns and public assumption of debt was so fierce after the stadium opened, that then Miami-Dade mayor Carlos Alvarez was removed from office in a recall election.

The NFL’s Miami Dolphins have been eyeing a new football stadium for several years now. The stadium they play in now is located in Davie, Fla., some 30 miles north of downtown Miami. The stadium is only about 30 years old, but the Dolphins ownership complains about the lack of premium seating and other amenities common to the new, luxurious stadiums. The NFL office, acting like North Korea, has threatened that it will not hold another Super Bowl in south Florida, unless there is a new stadium built.

It was recently reported by the Miami Herald that about 73 percent of likely Miami-Dade voters oppose a plan to give the Dolphins a tax subsidy for stadium improvements. According to a new poll obtained by The Miami Herald, the issue is a political killer for politicians to support.

“This is toxic to the Legislature, the county commission and the executive,” said Dario Moreno, a political science professor at Florida International University who conducted the 1,000-voter survey for a private client. “There’s not one group of likely voter who supports this idea. Even in County Commission District 1, where the stadium is, people are overwhelmingly opposed.”

Overall, nearly 61 percent of people polled strongly oppose the measure, while nearly 12 percent simply oppose it. Only 17 percent support or strongly support it. Poisoning the Dolphins effort: The unpopular Miami Marlins baseball stadium deal, which led to the successful recall of  Mayor Alvarez.

The Florida Legislature is considering a bill that would allow voters in south Florida the opportunity to approve any stadium plan that the Dolphin owners and local government officials might negotiate. The current proposal calls for a 1-cent tax increase on lodging and a $3 million annual sales tax subsidy to help pay for new digs.

Given the poll numbers reported by the Herald and the fact that neither the Florida House speaker nor the leader of the Senate are from south Florida, it seems increasingly unlikely that the Legislature will even approve a referendum on the project. Miami-Dade area legislators are not strongly in favor of the plan. The Legislature as a whole contains a Republican majority who are anti-tax people not likely to want to associate themselves with a project that would be seen as involving a tax hike.

Part of the problem also is the perception of back-door dealing by the Dolphins. They first went to the Miami-Dade commission to work out a financing plan with no input from the public. Now Dolphin officials and public officials are dealing with an angry backlash.

Jacksonville officials about a decade ago agreed to spend some $400 million to essentially rebuild the old Gator Bowl stadium for the NFL’s Jaguars. Revenues have not come in as expected and the Jacksonville-Duval County government has been, in a sense, left holding the bag. Jaguar attendance has been so poor that most home games are blacked out on TV, even though team owners have screened off some seats to lower capacity.

The day of welfare for sports owners may be coming to an end. It was announced last month that the Sacramento Kings of the National Basketball Association (NBA) may be sold to a Seattle ownership group that plans to move the team to Seattle. The Kings owners have been working with Sacramento government leaders for five years to try and come up with a financing plan for a new arena. Arco Arena is less than 20 years old and seats some 16,000 but is considered outdated compared to the newer arenas.

But Sacramento officials have failed to gain approval for any plan that calls for significant public investment in the project. In Atlanta, Falcons owner Arthur Blank has been forced to accept that private financing will have to pay for 80 percent of the cost of a new stadium. Even at that, it is not certain that local government officials there will be able to come up with a plan to provide any public money.

Professional sports franchises are private businesses. They are worth many millions of dollars. Owners today are mostly rich beyond comprehension. Citizens in cities that can hardly afford basic public services are just not interested in giving handouts to rich guys. The threat of franchise movement to greener pastures no longer seems to scare local leaders. Indeed, economists are almost unanimous in concluding that there is no empirical evidence that a professional sports franchise is an economic engine that helps local economies thrive.

Most Americans have had to deal with leaner budgets over the past few years. There is an increasing belief that pro franchise owners should be subject to the same market realities as the rest of us.