Olympic javelin thrower Roald Bradstock explains that his success over the years in the sport is result of applying artistic skills to his training and technique.

As an artist, Bradstock won the U.S. Olympic Sport and Art Contest for the 2000 Sydney Games. As he became the United States Sports Academy’s 2003 Sport Artist of the Year, he earned the nickname “The Olympic Picasso.”

Bradstock explains why artistic skills have contributed to his success:

“I believe my success last year, and indeed the last few years – being ranked number one in the World Masters ( 45 to 49 age group ) for the the past five years in a row, breaking four World Age Group Records in 2012 and coming second in my 8th Olympics Trials aged 50 last year – is due, in large part, to applying artistic skills into my training and technique; skills like balance, rhythm, harmony, creativity, repetition, precision and visualization.

I believe all athletes use artistic skills like these. I just turned up the volume and pushed it to a new level. The hand-painted shoes, socks, tights, tops, arm sleeves, hats/caps and javelins are just the last visible layers.

When I throw in a compet 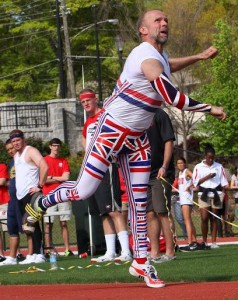 ition, I think of it as ‘Performance Art’ ( as quoted in the UK’s Guardian last year). I am on stage and perform a well-rehearsed dance movement. And now, because of my age, painted outfits, unusual rotational technique, distance I am throwing and records I am breaking, it becomes more of a story. An old, short, bald, artist nicknamed the ‘Olympic Picasso.’

I have competed in about 700 competitions, over 40 seasons in my life time and thrown approximately three million times without a single surgery, or any problems with my elbow or shoulder ever. And, I have spina bifida!

Now, if I could be faster then a speeding bullet, more powerful than a locomotive and be able to leap tall buildings in a single bound, maybe they would make a movie about me?”