Once looked upon as an underestimated and often ignored injury, sport-related concussion has taken sports media by storm. Reports of athletes suffering from long-term cognitive deficits have now labeled concussion as a public health concern. There has been a noticeable increase in attention in the past decade regarding the prevention and management of sport-related concussions. This is evident through the vast number of scientific investigations published since the year 2000 and the increased effort in developing concussion programs.

With the ever-growing popularity of sports in the U.S., the prevention of all concussions is practically impossible. Thus, efforts should focus on limiting the number of repeat concussions, along with improving the knowledge and understanding of the degenerative brain disease we now identify as chronic traumatic encephalopathy (CTE). 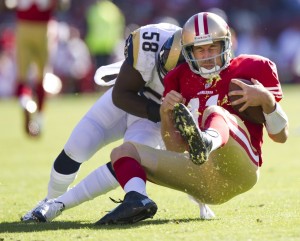 CTE is characterized by confusion, tremors, slowing of speech and overall mental deterioration (Saffary, Chin, & Cantu, 2012). CTE is no longer associated with just boxing, but other contact sports as well. Since 2005, clinicians and researchers have found the disease CTE in multiple athletes, including football players.

Evidence continues to grow indicating that undetected concussions, coupled with repeated head injuries over time can lead to significant brain damage. Subtle changes with every concussion sustained can lead to suboptimal brain function, which places the brain at higher risk for more serious damage.

Experts are still in the beginning stages of fully understanding concussion and CTE. Developing effective ways of detecting and diagnosing concussion will hopefully lead to a better understanding of this injury. Prevention and treatment approaches are currently in development. The National Football League Players Association (NFLPA) is in the process of negotiating a deal with the NFL to award Harvard University $100 million to research and treat players’ injuries. Here is the link: http://www.cnn.com/2013/01/29/health/nfl-harvard-study/index.html?hpt=hp_t3

Brandon Spradley is a Teaching Assistant and doctoral student at the United States Sports Academy.  He has helped with research projects at the Academy and has taught in international programs sponsored by the Academy.  Dr. Will Evans is the Dean of Academic Affairs at the Academy.  He is also a licensed chiropractor.