(Editor’s Note:  This article is a review of the recently published autobiography, Running My Life, of Sebastian Coe, the former English runner and statesman who played a key role in securing and organizing the 2012 London Olympic Games in London.) 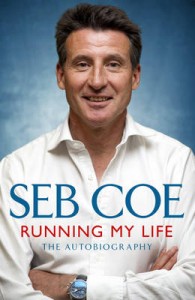 Sebastian Coe has been in the sporting spotlight for much of the past few years.  As the leader of Great Britain’s organizing committee for the 2012 London Summer Olympic Games, Coe was the face of those games for many people.  Coe’s own life has illustrated the short distance between greatness and anonymity.  As a youngster, Coe learned to sprint by running from a market after shoplifting apples.  He spent much of his youth in a working-class section of Sheffield.  His mother was half-Indian.  He was an indifferent student in school and initially failed the 11+ school tests that all British students take.  Yet, he pushed on and would eventually graduate from Trinity College.

Coe’s second autobiography, Running My Life, has just been released and is currently receiving a lot of media coverage.  Coe’s first book, Running Free, was published in 1981 when he was 25.  It dealt with details of his running career, which was at its height at that time.  He had first come to prominence as a runner in 1972, and in 1981, he set world records for the 800-meter, 1,500-meter and 1-mile runs over a span of three months.

Coe went on to an uneven career as a Conservative Party member and member of Parliament.  He then took on a lead role in trying to help London win the right in 2005 to host the 2012 Summer Games.  It is this final stage of his career that has perhaps brought Coe the most praise of all.

This latest autobiography is divided into three sections.  The first section deals with his childhood and family background.  The next section details his running career and foray into politics.  The final section covers his role in bringing the 2012 Summer Games to London.

The book is full of interesting stories (such as his admission of stealing apples as a boy) and conveys life lessons such as the value of strong and supportive parents.  The book in particular deals with Coe’s relationship with his father, Peter Coe, who for most of his running career was also his coach.  Readers of this book will wonder whether Coe would have “made it” without the support and guidance of his father.

One of the best sections of the book is the chapter entitled “Dodgy Business,” where Coe talks about the era in running where it went from being an amateur sport to the professional sport we know today.  This period of “shamateurism” makes for fascinating reading as we learn that Coe would stand in line underneath stadiums for his payment and then have to smuggle the money back into England, which had strict regulations in the 1970s and 1980s about bringing foreign currency into the country.

The book is a bit slow in the period of Coe’s life where he was involved in politics.  It picks up steam rapidly, however, as Coe leads the British efforts to secure the rights to host the 2012 Games.  This section is full of interesting stories about the behind-the-scenes activities that, in the end, helped secure the bid.  These insights are perhaps the most fascinating sections of the book.

Coe grew up in the mining communities of England’s midlands, and never forgot his egalitarian roots.  These instincts were at the heart of Coe’s motivation to bring the Olympics to England.  It is fair to say that without Sebastian Coe, there would have been no London games in 2012.  This comes through clearly in a reading of the book.

Coe knew that if the Games came to London, they would revitalize the area of East London and its landscape, changing thousands of lives.  This has in fact happened.  Commentators have called these Games one of the most successful in history.  These Games are a testament to one of the greatest runners of our age, who also established himself as one of the greatest statesmen.

Running My Life was published in 2012 in London.  It is available through Amazon Books at http://amazon.com/books.  Coe is a past winner of the Eagle Award, which is the highest international honor bestowed by the United States Sports Academy.  The book is a must read not only for sport fans, but for anyone studying sport management and related topics.