Edmund Burke might have known about politics, philosophy and the ways of the 18th century but he was not a seer who could see into the 21st century who could predict what was going to happen in big time college sports. The Irish politician knew his game back in the 1770s and apparently was one of the first to have said, “Those who don’t know history are doomed to repeat it.”

George Santayana expressed a similar belief. Apparently those who are watching the “final” realignment of big time college sports are being lulled into a sense of inevitability that the current round of conference jumping will be the final as big time schools settle into new conferences for money making opportunities.

We have heard this song before. Nine years ago, there was shifting of big time schools into various conferences for the want of TV money. In 2003, the state of Maryland was in the middle of a turf battle between the Big East and the Atlantic Coast Conference (ACC) after the ACC poached the Big East Conference and “stole” some of the conference’s members with the promise of more money. 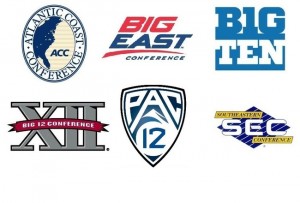 According to one University of Miami alum, the school boosters needed to raise $10 million this year to keep up with public schools, and that money needed to be privately raised.

That is a real dilemma for private schools trying to compete with taxpayer-assisted programs that can always good a state legislature and ask for more funding for sports programs through stadium expansion or raising student fees to help supplement sports programs.

The state of Maryland is embroiled in a snit with the ACC, a conference that wants $50 million to free the school so it can pursue money making opportunities in The Big Ten. It appears the state is again for the second time in nine years and could be facing a lawsuit because of big-time sports.

Back in 2003, Maryland was a defendant in the suit because four Big East Conference schools, along with the states of Connecticut and Pennsylvania thought the ACC conspired to cripple the league by inviting three schools, the University of Miami, Boston College and Syracuse University, to join their conference.

In the end, Virginia Tech and Miami, the Big East’s two most powerful football programs, joined the ACC. There was a bit of irony that Virginia Tech joined the confederation. Virginia Tech was not invited to become an ACC member and was part of the original lawsuit that Rutgers, Connecticut, the University of Pittsburgh, and West Virginia filed against the ACC, and its nine member schools along with Boston College and Miami.

If this is confusing, welcome to the world of Division I college sports, which is ruled by football and money. The ACC wanted more TV money, and the only way they could get it was by grabbing football powerhouses.

It is long past the time to stop pretending that Division I college football and basketball are some sort of amateur or scholastic endeavor for students. It’s a big time professional operation where everyone from schools to coaches to TV networks makes big dollars. Everyone, that is, except for the performers, teenagers and young adults who play the games that attract people to the arenas and stadiums or to cable or broadcast television.

The original ACC action outraged then-Virginia Governor Mark Warner. The Governor was not too upset that this small group of colleges want to grow their sports association and make more money. He was furious that the ACC did not want Virginia Tech and that the school might have to compete in a smaller, weaker football conference.

Then-Connecticut Governor John Rowland was not too happy either with the ACC. You see then-cash poor Connecticut spent millions of dollars on a stadium so that the University of Connecticut could play Division I football. The former governor must have thought by having Miami coming into Hartford every other year to play Connecticut it would legitimize the state university’s program.

Pennsylvania joined in the fray because it spent millions of dollars to help pay for athletic facilities at Pittsburgh.

College and universities are supposed to be places where students matriculate and get ready for the real world. For Division I schools though, the real world is filling stadiums and arenas with well-heeled boosters, signing deals with corporations for stadium naming rights, getting money from shoe companies for outfitting their teams and putting the best product available on the field so that Disney’s ESPN, Comcast’s NBC, NBC Sports Network, Time Warner’s Turner Sports, Sumner Redstone’s CBS, and Rupert Murdoch’s FOX and FOX Sports Net can dole out multimillion-dollar contracts for their games.

Division I school presidents at public schools have no problems handing out multimillion deals to football and basketball, making those coaches their state’s highest paid employees.

While all of this is going on, Division I college athletes are getting nothing but a scholarship to attend the school. And, attend is the operative word here because there are many schools who are not graduating their football and basketball players.

While schools meet and try to carve up territories to their financial advantage, their athletes have to be held to a different point of accountability. Athletes are prohibited from holding down jobs while they play. Even if so-called student athletes want to go to class, they are somewhat restricted because of long, daily practices and travel.

The student-athletes are also required to attend “voluntary” practices and are not insured during the off-season, even if they attend the so-called “voluntary” practice. These athletes are responsible for billion-dollar TV deals for the NCAA Basketball Tournaments, multimillion-dollar national and local cable and broadcast TV deals, yet, they do not see a penny from it.

It’s time to stop pretending that college sports is some sort of amateur event. It’s not. It’s all about generating revenue to maintain a big-time sports program.