As witnessed by widespread use, positive athlete testimonials, and even the new pink lemonade 5-hour energy commercials, energy drinks (EDs) appear to be perceived as safe and socially acceptable.

The reality is, EDs and the herbal ingredients found within them are unregulated in the U.S. and have not been “recognized as safe” (FDA, 2003). The FDA does regulate the level of caffeine in soft drinks to 0.02% (71 mg/12 oz). However, EDs contain herbal ingredients so they are classified as “dietary supplements,” which are not subject to the same safety guidelines (FDA, 2007). 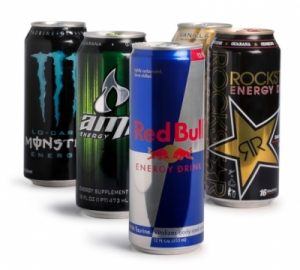 The potential dangers to consumers using EDs are now greater than when it was simply Red Bull. Many EDs now contain significantly higher levels of caffeine and powerful herbal stimulants which were not previously in EDs. “Drinks’” such as Redline RTD (250mg/8oz) and SPIKE Shooter (300 mg/8.4oz) contain caffeine levels approximately 3-4 times higher per ounce than a traditional 8.3 oz Red Bull at 80 mg.

Energy shots are also a growing concern with shots such as Redline Power Rush containing 350 mg of caffeine in just 2.5 ounces. In addition to “standardized” caffeine, new EDs contain herbal stimulants such as guarana, yerba mate, ginseng, N-Acetyl-L-Tyrosine, yohimbine HCL, and evodiamine. Yerba mate and guarana are natural forms of caffeine, but are typically not included in ED caffeine content calculations because they are unstandardized. Yohimbine HCL and evodiamine are found in drinks such as SPIKE and Redline.

These particular ingredients pose a greater danger to users than caffeine because they are much more powerful and most people do not have a tolerance to these substances like they do to caffeine. ED advertisements often minimalize and justify the use and safety of their products by citing that they have “about as much caffeine as a cup of coffee.” What does “about” really mean? In reality, the “about” part of this equation is loosely interpreted and often does not include natural forms of caffeine (e.g., guarana). To a large extent, EDs have been able to evade FDA regulation due to the sale of high caffeine content coffees.

Research indicates that adolescents and young adults (those under age 25) are more vulnerable to addiction, in part, due to incomplete development of the memory and pleasure reward centers of the brain (Miller & Carroll, 2006). Research shows that the younger one starts using substances the more vulnerable they are to develop a dependency to them. Adolescents are particularly vulnerable because of the incomplete development of the impulse control and addiction centers of their brains (Miller & Carroll, 2006, Ch. 4). Adolescents have a harder time seeing future consequences so they may be more easily enticed by the immediate pleasures and rewards of energy drinks.

EDs have already been linked to seizures, stroke, tachycardia and heart palpitations (Iyadurai & Chung, 2007; Walsh, Marquardt, & Albertson, 2006). It is time for consumer health initiatives. If EDs are going to be considered as nutritional supplements, they should not be allowed to be marketed and sold as drinks. This is confusing to consumers and contributes to a false sense of security in the safety of these products.

Conrad Woolsey is the Academy’s Chair of  Sports Studies. His extensive research areas include alcohol and energy  drinks, health behavior change, and sport psychology. He can be reached at cwoolsey@ussa.edu.