CNBC posted a report comparing the success of the U.S. women’s Olympic athletes to that of the men.  The American women have dominated swimming, track, and gymnastics.  In addition, the soccer, basketball and water polo teams all won gold medals and the volleyball team won a silver medal after losing to Brazil in an upset in the finals.

Even though the American men have had great success, they compete against a huge number of highly trained athletes from all over the world. Dominating all these sports is very difficult.  Moreover, the elite American male athletes gear themselves to professional careers in football and basketball with track and swimming finding a smaller talent pool.  Conversely, I think the sheer numbers of women in America competing at the highest levels of Olympic sports dwarfs those from most countries outside of China. In addition, the coaching and training these women receive from childhood through college develops great athletes and teams. 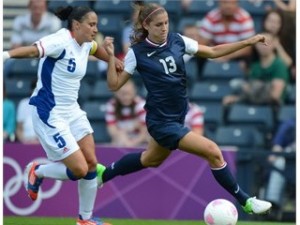 The few breakout stars from these sports like Gabriel Douglas will make millions of dollars.  These riches are a strong incentive for any woman to put in the Herculean effort needed to win at the Olympics. Most of the women participating in these sports at a young age will never attain world class status.  Another reward must exist for the athlete and her family to go through the grueling training, the extended travel, and the mental stress.  Surely, the love of playing soccer for a 14 year old does not warrant the commitment that most families must endure.

Title IX and the college scholarships the law mandates provide that incentive.  All the sports mentioned above have culled players off the college rosters.  Even the 12-year old gymnasts realize that a scholarship to UCLA and an NCAA championship will be well worth the effort.  While many foreign born women fill the rosters of college teams most athletes are still Americans, and our Olympic teams have truly benefited.  I think this is why American women have dominated in the collegiate sports that are part of the Olympics since Title IX was passed by Congress 40 years ago.  If team handball were played in the Big Ten, then America probably would have won the gold in that sport.

It is also a fact that women do not have the same number of opportunities to continue their athletic careers in pro sports as men do.  Two women’s soccer leagues have failed in the last 10 years.  The WNBA has established itself as a summer basketball league; but it has far fewer teams (and thus jobs for players) than the NBA.  There is no a women’s pro softball league in any real sense.  Even in track and field the prize money for women is not nearly as lucrative as what is available for men.

While female athletes may never earn the salaries of male collegiate stars in football or basketball, these women have opened doors for themselves in many careers.  Their Olympic success has given them recognition for branding opportunities and as a way to enter the sports and entertainment fields.  Moreover, Title IX has helped to instill a lifetime of dedication and hard work that will create success for anyone.  On CNBC the other day one of the hosts interviewed the gold medal rowing team.  One of the women talked about going to law school, and I have no doubt she can be on the Supreme Court in thirty years.

Jonathan Falk has a bachelor’s in biochemistry from the University of California at San Diego and an M.B.A. from the University of Colorado.  He can be reached at jon.mdfalk@gmail.com. Mr. Falk is a partner with Mindscape Trading, a proprietary trading firm.  He also operates Jaxtraw Poker, a site dedicated to teaching people of all ages and levels how to improve their gaming skills.  He recently started a blog, Jax on Everything.