While taking a class at the United States Sports Academy in pursuit of my doctorate, Dr. Dexter Davis and I began a discussion on the topic on instant replay and technology in sport. I consider myself to be a naturalist when it comes to sport. Play the game as it has always been played. Athletes can only control their actions and not those of officials.

However, with the explosion of technology in sport over the last several years, I realize that instant replay is only going to become more prominent. 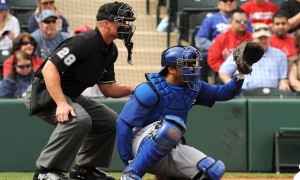 To answer this question we need to look at the positives and negatives. With instant replay we should be assured that all calls will be made correctly, however, this is not always the case as replay still has a human element.

In football, I believe the NFL and NCAA have instant replay partially right. Every scoring play is reviewed to assure that it was called correctly on the field. The NBA and NCAA use instant replay to distinguish between a two and three point shot and to determine if a shot was made before time ran out. Major League Baseball is beginning to use instant replay to aid umpires with home run calls.

Many people believe baseball is a slow game to begin with. Slowing it down with instant replay could lead to larger problems. MLB is not the only sport that could have a problem with the pace of the game being slowed. The NFL limits the amount of time a play can be reviewed, however, the NCAA has no time limit. This leads to extended breaks in action and can also change the momentum of a game.

How can replay make games more attractive to fans? One word: consistency.

I also believe that instant replay should be used to compensate officials based on performance. Officials are already graded and given the opportunity to participate in postseason games based on performance; but advances in technology should be used to pay officials who are consistent. An official who consistently makes the correct calls and is in the correct position should be paid for doing his or her job well. Just as a professional athlete who performs his or her job well is paid, officials should also reap this benefit.

The debate over technology and instant replay will continue into the future. With advances in technology happening every day, we as sport professionals need to determine how it can best benefit our profession and our sporting events.

Mr. Dugas has a bachelor’s degree in Sport Management and a master’s degree in Sport Administration, both from the United States Sports Academy.  He is currently working on his doctorate from the Academy.  In real life, he works as a high school English teacher in Naples, Fla.  He also is the high school baseball coach at his school.  He can be reached via email at Bboy163@aol.com.