(Editor’s Note:  This article and a counterpoint by Dr. Arthur Ogden are being posted together on this blog. The purpose of a blog should be to facilitate thought and discussion on serious issues.  The views expressed in both articles are not necessarily the views of the Digest editorial staff or of the United States Sports Academy as a whole.)

My colleague, Roy Boyd, and I were complaining about the latest excesses in intercollegiate athletics (ICA) at our school (Ohio University), when Roy opined that a large number of the seven deadly sins were involved. Upon further reflections, I think all seven of those sins have been part of the ICA scene in recent years. 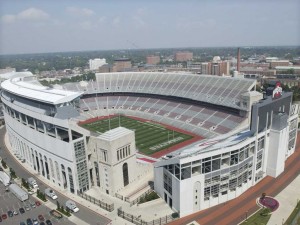 I will use a slightly updated (from Biblical times) list of the sins as used by Dante in the “Divine Comedy,” very close to what I understand to be the official doctrine today of the Roman Catholic Church regarding such matters.

1. Lechery or Lust: Of course, the Penn State scandal seems rooted in lust,  but so are many others. Football coaches have been sacked at several schools (e.g., the University of Arkansas, University of Colorado) over scandals related to the provision or inappropriate pursuit of sexual favors.

2. Gluttony: Excessive spending and consumption pervades high level and even mid-major college sports. Coaches love to brag to competitors, “my indoor practice facility (weight room, office, artificial-surface football field) is bigger/nicer than yours.” This has contributed to the athletics arms race.

4. Discouragement/Sloth: True, most of the successful participants in ICA are anything but slothful (lazy), yet the culture of ICA discourages hard academic work, and stories abound of athletes taking no-work courses, of schools canceling classes to allow the party atmosphere around big games to fester, etc. News reports claim that even Berkeley administrators are telling instructors not to schedule midterms on days when the team has a Friday night home game.

5. Wrath: Again, the competitive juices that lead to entertaining matches sometimes boil over into excessive anger accompanied by physical force. Players have been intentionally maimed, coaches have hit their own players, etc. For decades, Bobby Knight’s temper tantrums were a fixture of college basketball.

6. Envy: Much of the spending spree has been motivated by envy–a desire to not only keep up with competitors but also a desire to reduce their power and glory in order to improve one’s own relative position.

7. Pride, Hubris: Supposedly the deadliest of the deadly sins, the desire to be more important, more regarded than others, is at the heart of the athletics arms race. All the talk about the favorable financial and applicant gains associated with athletic success are all cover-ups for the hubris involved.

My discussion with Roy was prompted by news from Ohio University. A few weeks ago, our basketball team went far, making the NCAA Tournament Sweet Sixteen. Our $250,000 a year basketball coach, John Groce, behaved rationally–within a few nanoseconds (it seemed) of season’s end, he departed for the University of Illinois for roughly five times the salary. Ohio University then hired a new coach, with a below .500 record at Texas Christian, as head coach at $425,000 a year–70 percent more than the previous coach was paid (but less than his TCU salary).  The football coach, Frank Solich, making a paltry $330,000 a year despite a pretty good record, probably marched into the athletic director’s office and demanded to make more than the basketball coach, and reportedly is now being given a $100,000 raise. A successful basketball season leads to a $100,000 raise for the football coach–go figure.

Stories like this are going on all over the country. In the same year that I was told I could no longer have a phone because of budget constraints, my university is increasing intercollegiate athletic subsidies because it succumbed to some of the Seven Deadly Sins.

College sports is not Garrison Keillor’s Lake Wobegon. The fatal problem is the Iron Law of Sports: every time someone wins a game, someone else loses. It is mathematically  impossible for a majority of schools to excel at the major sports. A majority of schools, including mine, almost certainly can never really succeed on any sustained basis, since they lack the population base or the following to realistically generate the revenues justifying extravagant expenditure.  The fact that they continue to try shows how subsidies and tuition fees collected by higher education have often been misused in wasteful, even anti-academic, ways.

Richard Vedder is Distinguished Professor Emeritus at Ohio University. He directs the Center for College Affordability and Productivity, where he has published numerous articles on the economics of intercollegiate athletics.  Interested readers can go to the website at http://centerforcollegeaffordability.org/.