Argentina soccer fans are apparently a tad upset that their team, Racing, is playing so poorly. They’re so beside themselves, in fact, that one player had a fan stick a gun in his face and threaten to “ruin his career” unless Racing won its next game.

Most Argentine soccer clubs are followed by groups of young fans who call themselves “barras bravas,” which roughly translates in English to “hooligans.” 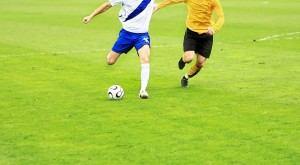 The Racing soccer club is one of the most prestigious teams in Argentina.  Located in Buenos Aires, it has usually played in the shadow of River Plate and Boca Juniors, but the club still has won numerous trophies.

Fans are not happy about their team possibly being relegated after the season is over in December.  News reports detailed how one Racing player was stopped leaving the club’s training grounds.  A man leaped out of a car with a gun and held it up to Giovanni Moreno’s face and then placed it against his left knee.  The gunman said if Racing did not win its next game, he would shoot Moreno in his legs and ruin his career.

The incident may have been precipitated by rumors that Moreno, a Columbian national, was leaving Racing for bitter rival River Plate.  River Plate was itself relegated to the second division last year.  After its final match at its stadium, fans rioted and caused considerable damage to the stadium and the surrounding neighborhood.

Argentine clubs’ have created a monster by usually supporting groups of barras bravas. Many clubs actually subsidize these fans to travel to away games.  They often even receive free entry into their clubs’ home matches.  Some clubs have groups that back one faction of club leadership over another and the rival groups often brawl in the stands at matches.

Argentina stadiums separate opposing teams’ fans in different ends of the stadiums with separate entrances.  All of the stadiums have wire mesh fences erected in front of the areas where the barras bravas will be.  This is done to minimize the debris they can throw at opposing players and onto the field.

Sadly, these groups also terrorize their own players when things don’t go well.  In February, a junior player with the San Lorenzo club, which is also threatened with relegation, was knifed in the stomach during a confrontation with young barras bravas near the team’s stadium before a senior team match.

Because club officials have taken to using the barras bravas much like Hitler used the Brown Shirts in the days when he was running for election to German public office, Argentines attendance at most matches has dropped considerably and many league teams are facing serious financial pressures.

Fan violence is a topic that every student at the United States Sports Academy studies in a course that deals with current issues in sport. In addition, the Academy offers a Sports Security emphasis in its degree programs. For more information on Academy bachelor’s, master’s and doctoral majors go to http://ussa.edu.