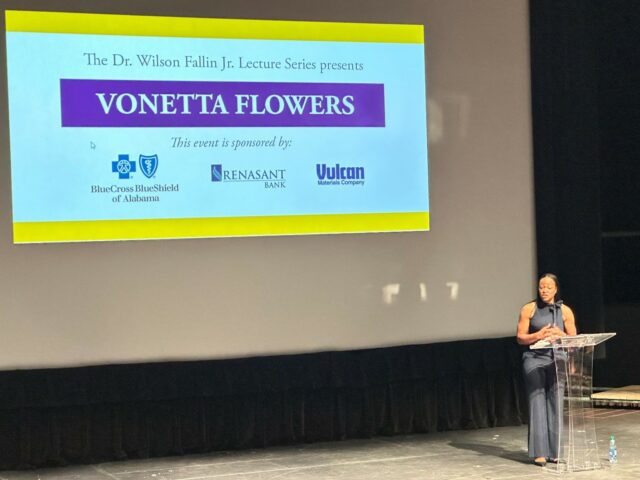 Vonetta Flowers recently delivered a powerful message as the featured lecturer for the second Dr. Wilson Fallon Jr. Lecture Series at the University of Montevallo.

Flowers’ message was straightforward, “Everyone Needs a Push.”

Vonetta, a native of Bessemer, Ala., and Alabama Sports Hall of Fame Member, was not always a bobsled athlete; however, injuries during her time competing in track & field eventually led her to the ice. Her success at the 2002 Salt Lake Winter Olympics resulted in a gold medal and cemented Vonetta as first Black person (male or female – from any country) to win a gold medal at the Winter Olympics.

But she did not do it alone, she needed a push.

Flowers message connected how positive change is not easy, but people and their support systems help make the impossible, possible. This concept holds true for those who lead and have led the charge for social justice, racial justice, equality, and inclusion.

From the age of nine, Vonetta had dreams of being an Olympian. But the climate in Bessemer never led her to imagine her Olympic sucess would be pushing and riding a sled down the ice. Vonetta was a lifelong track star but finished 13th in the 1996 Olympic trials and 12th in 2000 Olympic Trails in the long jump – leaving her dreams just out of reach. However, at her lowest point, her husband pushed and encouraged her to try bobsledding. After exploring her opportunities and completing a battery of athletic assessments, Vonetta uncovered a new path to the podium.

However, her new path had obstacles as well. Bobsled starts with a push, picks of speed, and is filled with twists and turns before reaching the end. After Vonetta started, she achieved initial success – rising a top-3 world ranking. Unfortunately, her bobsled partner and driver chose to go a different direction prior the 2002 Olympics. In that moment, her dreams crashed again. Vonetta found herself on a plane ride home back to Bessemer leaving her Olympic hopes behind – just short of the finish line.

Once back home, her husband pushed her to keep training and keep chasing those dreams. Serendipitously, another chance was just around the turn. Vonetta received a call by another Olympic-hopeful – a bobsled driver who was looking for a push. The rest, as they say, is history. Vonetta finally had her chance – landing on a bobsled team just 2.5 months prior to the 2002 Winter Olympic games. Eventually, she pushed her teammate – Jill Bakken – and they took home the first ever women’s bobsledding gold medal.

Vonetta’s previous success pushing is still pushing others. The newest generation of bobsled athletes point to Flowers as their inspiration. Meyers Taylor, four-time Olympian who has won medals in bobsled and in the 2022 debut of the monobob, stated, “Vonetta’s the reason I came out to bobsled…. Seeing somebody who looked like me, who came from another sport, transferred into bobsled, and had success is what put the idea in my head that I could figure it out. I definitely wouldn’t be here without her.” Of note, on Team USA’s 2022 Winter Olympics women’s bobsled team, three of the four athletes were Black.

While the message is simple, the need to keep pushing for good requires effort from everyone. Change is not easy, there will be setbacks, and the work might not ever have a true finish line – but if you keep pushing you will continue to make a difference.

The Dr. Wilson Fallin, Jr. Lecture series was established by the University of Montevallo Board of Trustees in 2021 to honor Dr. Fallin’s lifelong efforts in the civil rights movement and social justice. Dr. Fallin is a professor emeritus in history from the University of Montevallo. The lecture series will highlight educational and socio-cultural topics related to African American heritage, social justice and racial justice. The lecture series will feature a nationally renowned expert in these subjects and will engage students on topics and inquiries on societal and educational issues.

Anja Kuys is a Graduate Student studying Exercise Science at the University of Montevallo. Anja is also a Midfielder on the Women’s Lacrosse Team, has led the team in scoring multiple years, was recognized as an All-Conference player and achieved Academic Honor Roll in the Gulf South Conference, and represented her home country of New Zealand in the 2022 Women’s Lacrosse World Championship.

Crystal Williams is from Cooper City, FL, and a Graduate Student studying Exercise Science at the University of Montevallo. Crystal is an Honor Roll student-athlete on the Women’s Lacrosse Team recognized for her scholastic achievement by the Intercollegiate Women’s Lacrosse Coaches Association.