“We talked about getting them better, just concentrating on all the verbiage, our language, everything that we had,” Staley said during a post-practice press conference. “We wanted them to concentrate on that, along with being pulled in several different ways throughout the week. So I thought those guys did awesome”.

The good times kept rolling Friday night as fans lined the Port City streets for the Mardi Gras Player Parade held in downtown Mobile. The Vigor High School marching band led the parade as players, college mascots, NFL cheerleaders and coaches, Azalea Trail Maids, and other local dignitaries paraded through the streets. There was nothing but excitement in the air as the people of Mobile have waited over a year to celebrate Mardi Gras due to COVID. Following the parade, fans gathered in Cathedral Square for the Senior Bowl Street Party and concert from the Grammy Award winning band, Portugal. The Man.

Saturday afternoon kicked off the 73rd- annual Senior Bowl at Hancock Whitney Stadium on the University of South Alabama’s campus in Mobile. The National team, coached by the New York Jets staff, defeated the Americans, coached by the Detroit Lions, with a final score of 20-10.

Oklahoma’s defensive lineman, Perrion Winfrey, was the game MVP and finished the game with two sacks and three tackles for loss. Notable quarterbacks were Liberty’s Malik Willis, Pittsburgh’s Kenny Pickett, and Cincinnati’s Desmond Ridder. Willis demonstrated his ability to run the ball with a game-high 54 yards on four carries in the first quarter but was only 2-of-4 passing and 11 yards. Pickett, a Heisman Trophy finalist, finished 6-of-6 passing with a total of 89 yards and a touchdown in the first quarter. However, Ridder finished the game for the Nationals with 4-of-6 passing and 2 touchdowns.

With the conclusion of the Senior Bowl, most players will take the next few months to prepare for the NFL Draft.

“I’ll tell you what, man, continue to work on your craft,” Staley told the players after the game. “What I mean by that – and a lot of people think that means just working out, going out there on the field, the quarterback throwing the ball, a receiver running routes and so forth. Yeah, that’s a part of it, but I’m talking mental. Work on studying, making sure you know the game. Before you know it, you’re going to be at the Combine and some of those questions are going to start being asked about your film and who you are as a player.” 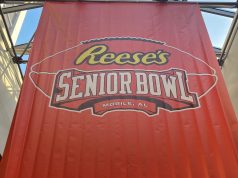