Election Day is coming up soon and there are two stadium proposals on the ballot in San Diego that definitely have the interest of Major League Soccer and perhaps the National Football League. San Diego elected officials would like to knock down the city’s seldom used stadium that Major League Baseball’s Padres and the National Football League’s Chargers once called home. There are two questions facing voters which is unusual. Generally there is just one stadium plan put before voters. San Diego State University has a different vision for redeveloping the stadium area than Soccer City backers.  There are a few possible outcomes. One plan wins, the other loses. Both plans win but the proposal that gets the most votes wins. Both lose and the future of the stadium area is unknown with city elected officials having to come up with a new plan.

The San Diego State University and Soccer City proposals have the same goal. Build a stadium that could be used for a Major League Soccer franchise. Soccer City wants a 23,500 seat building that could be expanded to accommodate San Diego State football. The university would build a 35,000 seat stadium that could be used for soccer or expand the building by 20,000 seats in an attempt to lure the NFL back to town. Soccer City’s plan includes setting aside 16 acres in the event the NFL is interested in returning to San Diego to build an NFL style stadium.  There would be the stadium-village offerings, a hotel, housing, a commercial district and a park. There is also a question of how both groups will pay for the city land that will be turned over for development. Neither plan is asking for taxpayers help. The NFL is not expanding but the MLS has two expansion slots open. San Diego voters are on the clock.

The Push is on for MLS in Texas 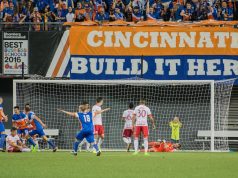