Filho and Barbosa made light work of their opponents with a 21-15, 21-17 triumph to seal their first-ever FIVB World Tour gold medal.

The duo, who had beaten Goncalves and Loyola in the group stage, topped the podium having not dropped a set throughout the tournament.

Phil Dalhausser and Nick Lucena of the United States delivered a medal for the host nation as they took bronze with a 14-21, 21-13, 15-10 win over team-mates John Hyden and Ryan Doherty.

“We’ll definitely get back to the sand more motivated,” Barbosa said.

“Next week we will play for the national tour so we can’t stop working.

“We want to work as hard as possible to be one of the best teams in the world.”

In the women’s final, Larissa Franca and Talita Antunes emerged victorious from their all-Brazilian clash with Agatha Bednarczuk and Eduarda Lisboa to secure the women’s title at the International Volleyball Federation (FIVB) World Tour event in Fort Lauderdale.

Franca and Antunes clinched the Fort Lauderdale crown with a 21-15, 21-18 triumph to seal their 14th gold medal as a pair.

The duo then honoured retiring referee Mario Ferro Junior at the end of the match, giving him their medals as a goodwill gesture to the departing official.

“We are so happy,” Antunes said.

“It’s the first tournament of the year.

“We fought a lot in all of the match and this one was amazing.

Julia Sude and Chantal Laboureur of Germany rounded off the podium as they earned the bronze medal by beating Brooke Sweat and Summer Ross of the United States 21-14, 21-14.

The victory for Franca and Antunes came after they had overcome Sweat and Ross 21-16, 21-16 in their semi-final encounter, while Bednarczuk and Lisboa ousted Sude and Laboureur in a gruelling three-game battle.

The final began in tense fashion as both teams tried to seize the initiative.

The contest remained level at 12-12 until Antunes sparked a 6-1 run of points in their favour, edging them closer to taking the first set.

They managed to close out the opener and they then proved too strong in the second set.

“It could have been better, but it’s a good start to the World Tour,” Bednarczuk said.

“I think we were tired with all the heat on centre court.

“Sometimes I am very strong but I was very tired.” 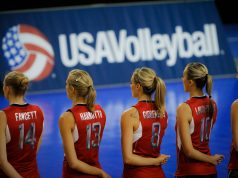