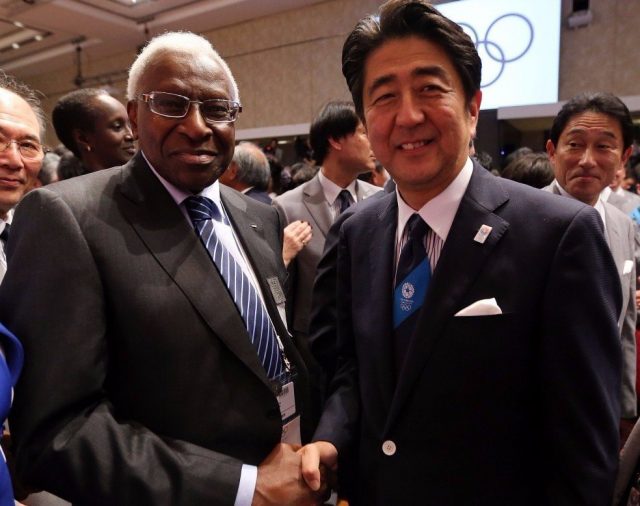 Japanese Prime Minister Shinzō Abe has vowed to cooperate with the ongoing French investigation into an alleged bribe paid by Tokyo 2020 during their successful bid to land the Olympic and Paralympic Games. Transfers totalling $2 million (£1.3 million/€1.7 million) were made in 2013 to a Singapore-based account owned by company Black Tidings, allegedly used by the disgraced Diack family.

Lamine Diack, the former President of the International Association of Athletics Federations (IAAF) and who was later embroiled in corruption allegations, was still a voting International Olympic Committee (IOC) member until 2013 and was also thought to have influence over the decisions of others.

It has been alleged that the money, therefore, could have been used to sway Diack and other voting IOC members at the 2013 Session when Tokyo was elected as Olympic host in Buenos Aires.

Tokyo 2020 and Japanese officials have denied all the allegations and claim the money was a legitimate consulting fee.

Abe, who played a key late role in Buenos Aires by meeting with influential members including Diack, has called for full Government cooperation with the French probe.

“I have instructed the Education and Sports Minister to fully cooperate in the investigation,” he told Parliament today.

“Education and Sports Minister Hiroshi Hase told the Japanese Olympic Committee (JOC) and the former Bid Committee to cooperate in the investigation.”

Tsunekazu Takeda, the President of the JOC and the leader of the Tokyo 2020 bid, claims the fee was for international consultancy and was paid to Black Tidings’ official owner Ian Tan Tong Han.

It is not yet clear what precise consultancy work Tan – who is thought to be in his 20s – provided.

Lamine Diack was arrested in France in November amid allegations bribes had been taken to cover up failed drugs tests in athletics.

The Senegalese stepped down as an honorary IOC member last year after the allegations surfaced.

His son Papa was one of three people banned for life by the IAAF for helping Russian marathon runner Liliya Shobukhova avoid punishment for doping – with it alleged that money was channeled through the same Black Tidings account.

Papa Diack has claimed he had not received any money from the Tokyo bid team.

“I haven’t got any money,” he told Kyodo News from Senegal’s capital Dakar, where he remains in hiding due to an Interpol warrant for his arrest.

“Let them investigate…I have nothing to hide.

“I’ve been in this sports business for 25 years – I know the rules.”

He admitted to having been friends with Tan, who was thought to have a key role in international athletics, since the 2008 Beijing Olympics, but claims he had no awareness of his involvement in Tokyo 2020.