The youngster took the lead by 7.5 points after the first round before pressing clear to finish on a total score of 445.25, the second ever registered in the event after team-mate Chen Ruolin’s mammoth haul of 456.40 in 2008.

“I am not sure, everything can happen there,” said Ren afterwards when asked if she believed she could win Olympic gold at Rio 2016.

“The only thing I know is that I want to do my best in Brazil.”

Canada’s Roseline Filion produced a strong fourth and fifth dive to climb to a distant second-place with 378.85. 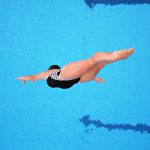 Cao Yuan was forced to work far harder than his Chinese compatriot to win the men’s 3m springboard competition after sustained pressure from fellow countryman He Chao and British rival Jack Laugher.

After a tightly-contested first four rounds, a mistake from the Briton in the fifth enabled Cao to power clear and secure gold with a total score of 540.15.

He overhauled Laugher to claim silver with 534.95 while bronze went to Illya Kvasha of Ukraine with 505.35.

China gained an expected victory in the mixed 10m platform synchro event to close out the day’s proceedings.

They were forced to work hard, however, with a missed dive in round four from Chang Yani allowing Canada to briefly take the lead heading into the final round.

But not for nothing are China the most dominant nation in the sport, with the pair of Chang and Tai Xiaohu claiming gold with 337.86.

Benfeito took a second silver of the day, with Vincent Riendeau on 333.60 points.

Do Female Athletes Choose Different Uniforms than their Male Counterparts?