The attitude and views of popes towards sport can be extremely diverse and enigmatic. Therefore, it would certainly be a worthwhile exercise to read church history as a history of sports, paying attention to the respective aspects of those disciplines that are of interest from the viewpoint of Christianity. The relationship between a pope and sports reveals not only his attitude towards modern sports and the Olympic movement, but most of all, his relation to the human being as a whole. The latter includes his perception of the human body, human virtues, a harmonic coexistence on our planet and the possibility of a universal language that transcends the barriers between cultures, countries and nations. Reflected by sport, we can thus see the human being itself and everything that sport can make possible through serving people.

If we read John Paul II’s 34 pastoral statements published on sports during his long pontificate from 1978 to 2005 (www.laici.va/…/sports/eng/…/jpii-pastoralmessages) and we approach the text with common and widespread stereotypes and prejudices in mind, we will be disappointed. We will be looking for signs of despise and hostility towards the human body and a disregard for sports activities in vain. What we do find, however, is surprising: in fact, it is downright explosive. We will encounter a wealth of important insights, timeless and calm, which continue to provide essential impulses for our appropriate understanding of sports and human beings.

A fundamental element of Pope John Paul II’s standpoint on sports and human beings is the distinction between two definitions of the body, which runs through his pastoral statements on sports like a red thread. While the human body as flesh is an object among other objects that can be regarded and examined objectively, it is also the expression of being human. As Pope John Paul II put it in his statement during the General Audience on 4 February 1981, the human being expresses himself through this body and “in this sense is that body“. Drawing on Apostle Paul’s first letter to the Corinthians, it becomes clear that the reduction of the human being to his bodily capacities and skills would fall short of the truth. Such an approach would lead either to the deadlock of pure contempt for the body as flesh, or to another dead end, that of naturalistic “body cult“, stylizing the body as an end in itself and making it an object of manipulation.

In his aforementioned address, Pope John Paul II thus persistently calls attention to the fact that the “Pauline description of the body corresponds precisely to the spiritual attitude of respect for the human body, due because of the holiness (cf. 1 Th 4:3-5, 7-8) which springs from the mysteries of creation and redemption.“

As one thus “has before his eyes the human body in all its truth, and so the body permeated in the first place (if it can be expressed in this way) by the whole reality of the person and his dignity.”

If we consider this perception of human beings in depth, it implies a perception of sports that favours the promotion and the complete unfolding of corporeality. Thus, one of the key sentences of John Paul II’s address given on 2 September 1987, when the Pope personally addressed the participants of the 2nd Athletics World Championship in Rome, was the following: “If sports is reduced to the cult of the human body, forgetting the primacy of the spirit, or if it were to hinder your moral and intellectual development, or result in your serving less than noble aims, then it would lose its true significance and, in the long run, it would become even harmful to your healthy and full growth as human persons.”

Taking that as a starting point, excesses of misunderstood athletic activities can be decisively countered. For sports should not be about spectacles and the media, or constitute a money printing and medals machinery in the first place, stripping athletes – and eventually sports fans and supporters as well – of their capacities and reducing them to mere cogs in the machinery of interests that do not contribute to the promotion of sports’ true value and dignity. Instead, if we regard sports as an excellent medium that contributes to the well-being of the individual, then humanity will thrive. Sports activities and athletes in particular are not reduced to their successfulness, but they are regarded as an example, especially for the youth who have to develop themselves in a comprehensive and holistic manner.

In his special audience for the representatives of the UEFA on 8 May 2000, John Paul II clearly calls on all football structures to “be a field of authentic humanity, where young people are encouraged to learn the great values of life and to spread everywhere the great virtues that are the basis of a worthy human society, such as tolerance, respect for human dignity, peace and brotherhood. “

Against this background, sport can be a medium of virtue formation and education, which does not only apply to sport. Since athletes who are entirely committed to the game have made these values their second nature, the latter are like hair and skin to them. In this way, there is a chance that the “virtues of sports training”, as John Paul II stated in his message at the opening of the Barcelona Olympic Games, “such as self-control, perseverance, respect for others, desire for top performance, fairness, sense of sacrifice, modesty and team work” will significantly determine the behaviour of the individual and the community “in order to make our lives more brotherly fair and amicable”.

If sport realises its educational vocation on an individual level by contributing “to the holistic development of a person“(the Pope’s address to the Council of the International Ski Federation on 6 December 1983), it can realise its educational vocation on the level of the community at the same time. Therefore, it can substantially contribute to our harmonious coexistence in this world. On an international level, as John Paul II expressed in his audience for members of the IOC in 1982, it can “contribute significantly to progress and brotherhood among people as well as to the spreading of peace”. If sport becomes a “culture of love”, it will offer a universal language that transcends the frontiers between cultures, countries and nations, and it will therefore allow for a “sincere and open dialogue”.

In the above mentioned special audience for the representatives of  the UEFA, John Paul II specifies what sport should become: “an overall development of the body, a sound spirit of competition, an education in the values of life, joie de vivre, fun and recreation“. If we succeed in this regard, it is not the individual who will be serving (or submissive to) sport, but sport will be at the service of mankind.

All these papal statements testify that John Paul II was an extremely well-informed Pope, who had a passion for sports. Having actively practised many different sports disciplines as a young man, such as canoeing, skiing, hiking, football and athletics, and keeping sports exercises as a part of his daily routine during many of his journeys, he demonstrated his love for sports also as pope on the occasion of skiing and hiking tours in the Aosta Valley, until his health did not allow him to do so any more. Thereby, he became an example of appropriately interpreted holistic body experience within the Catholic Church.

Both scholars are members of the academic advisory board “Church and Sport” of the German Bishops’ Conference. 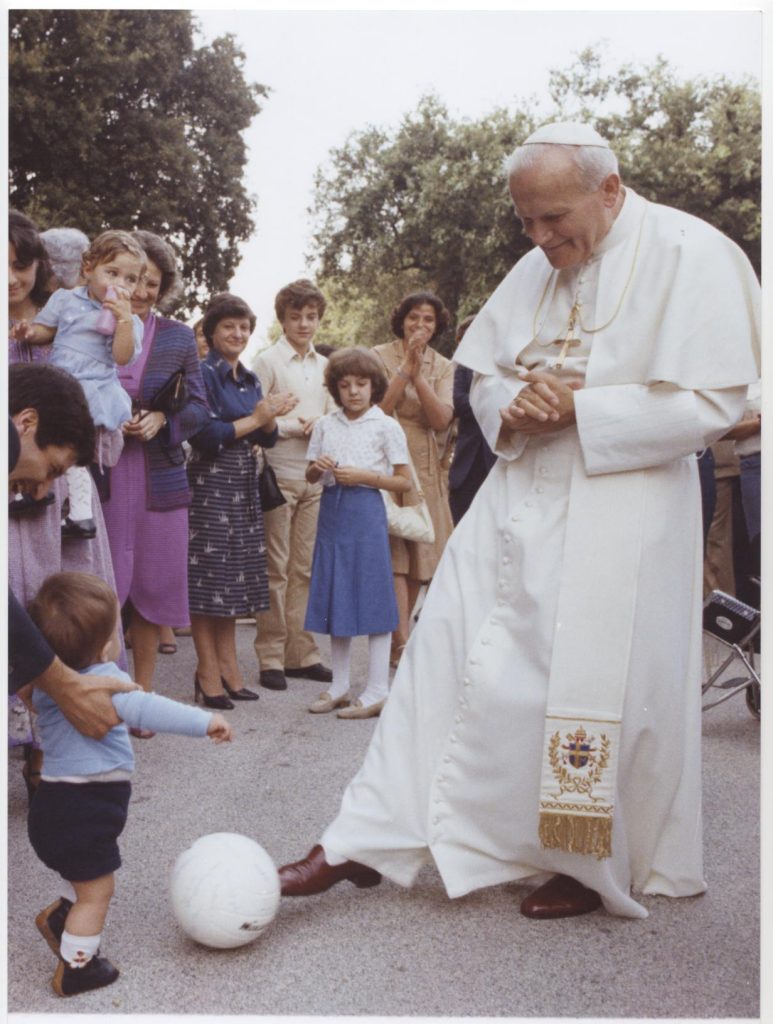