Amidst of worldwide discussions on Russian gay legislation, there is talk of “judicial tyranny” in Utah, home state of the 2002 Winter Olympics, after a federal judge struck down Utah’s voter-approved constitutional amendment — which defines marriage as the union of one man and one woman — finding that it violates rights to due process and equal protection as set forth in the 14th Amendment to the U.S. Constitution.

“I am very disappointed an activist federal judge is attempting to override the will of the people of Utah. I am working with my legal counsel and the acting attorney general to determine the best course to defend traditional marriage within the borders of Utah,” Utah Gov. Gary Herbert said in a statement. 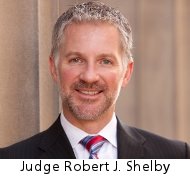 “The essence of judicial tyranny is when a single, unelected federal judge declares the laws and constitution of an entire state null and void with an opinion clothed in the barest of legal precedent,” said the Deseret News daily, a paper that is controlled by the Mormon Church of Jesus Christ of Latter-day Saints and is up in arms. “Late on Friday afternoon, U.S. District Judge Robert J. Shelby overstepped judicial bounds, ignored the weight of settled precedent and insulted Utah’s electorate by striking down Amendment 3 to Utah’s Constitution, the provision that defines marriage as between one man and one woman.”

Within hours after the federal judge’s ruling, County District Attorney Sim Gill confirmed that, in light of the ruling, he saw no reason to prohibit Salt Lake County Clerk Sherrie Swensen from issuing marriage licenses to same-sex couples, and as many as 120 gay couples descended on the Salt Lake County Clerk’s Office to obtain licenses, with many staying to marry on the spot.

Utah is one of 33 states that enacted constitutional ban on same-sex marriage. In 2004, 66 percent of Utahns approved Amendment 3 and its traditional definition of marriage.

Judge Shelby acknowledged in his ruling that “few questions are as politically charged in the current climate,” but he said the plaintiffs in the case were asking a question that depended on the U.S. Constitution. “The state’s current laws deny its gay and lesbian citizens their fundamental right to marry and, in so doing, demean the dignity of these same-sex couples for no rational reason,” the judge wrote. “Accordingly, the court finds that these laws are unconstitutional.”

Quoted by The Deseret News, Bill Duncan, director of the Center for Family and Society at the Sutherland Institute, said he wasn’t necessarily surprised by the ruling, based on questions he said Shelby asked at an oral argument hearing on the issue. Still, that doesn’t make the ruling “any less disappointing,” he said. “Because the baseline holding is that two-thirds of voters who approved the amendment in 2004 were acting irrationally, and that’s hard to swallow,” Duncan said. “There’s nothing in the U.S. Constitution requiring states to change the legal definition of marriage. The judge elevated his own thinking on a divisive social issue and turned it into a constitutional issue.”

He, too, said he was confused as to how an amendment requiring states to treat slaves as full citizens could be interpreted as it was by Shelby.

This article originally appeared in The Sport Intern. The Sport Intern editor is Karl-Heinz Huba of Lorsch, Germany. He can be reached at ISMG@aol.com. The article is reprinted here with permission of Huba.