Repeated blows to the head during a season of contact sports may cause changes in the brain’s white matter and affect cognitive abilities even if none of the impacts resulted in a concussion, according to a study published in the journal Neurology.

Using a form of magnetic resonance imaging, or MRI, researchers at the Indiana University School of Medicine and the Geisel School of Medicine at Dartmouth College found significant differences in brain white matter of varsity football and hockey players compared with a group of noncontact-sport athletes following one season of competition. White matter is composed primarily of axons, the long fibers that transmit signals between neurons. 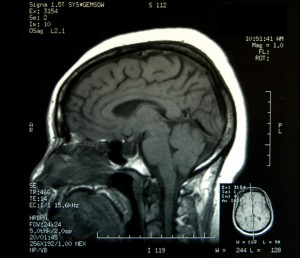 “The contact sports and noncontact-sports groups differed, and the number of times the contact sports participants were hit, and the magnitude of the hits they sustained, were correlated with changes in the white matter measures,” said Dr. Thomas W. McAllister, chair of the IU Department of Psychiatry.

“In addition, there was a group of contact sports athletes who didn’t do as well as predicted on tests of learning and memory at the end of the season, and we found that the amount of change in the white matter measures was greater in this group,” Dr. McAllister said.

The study was conducted while Dr. McAllister was Millennium Professor of Psychiatry at Dartmouth.

“This study raises the question of whether we should look not only at concussions but also the number of times athletes receive blows to the head and the magnitude of those blows, whether or not they are diagnosed with a concussion,” Dr. McAllister said.

Two groups of Dartmouth athletes were studied: 80 football and ice hockey players in the contact sports group, and 79 athletes drawn from such noncontact sports as track, crew and Nordic skiing. The football and hockey players wore helmets equipped with accelerometers, which enabled the researchers to compile the number and severity of impacts to their heads. Players who sustained a concussion during the season were not included in the analysis.

The athletes were administered a form of MRI testing known as diffusion tensor imaging, which is used to measure the integrity of the white matter. They were also given the California Verbal Learning Test II, a measure of verbal learning and memory.

The study did not find “large-scale, systematic differences” in the brain scan measures at the end of the season, which the authors found “somewhat reassuring” and consistent with the fact that thousands of individuals have played contact sports for many years without developing progressive neurodegenerative disorders.

However, the results do suggest that some athletes may be more susceptible to repeated head impacts that do not involve concussions, although much more research would be necessary to determine how to identify those athletes.

More work would also be necessary to determine whether the effects of the head impacts are long-lasting or permanent, and whether they are cumulative.

Watch a video interview with Dr. McAllister about the research findings.

The research was funded by National Institutes of Health grants R01HD048638 and RO1NS055020 and by the National Operating Committee on Standards for Athletic Equipment (NOCSAE 04-07).