Atlanta’s Olympic Stadium, renamed Tuner Field after the 1996 Games, will be demolished after the Atlanta Braves Major League Baseball team decided they will move to a new 672 million Dollars stadium in Cobb County.

At least for Mark Bradley, the columnist of The Atlanta Constitution Journal daily the news comes as a shock, because the Braves have played in downtown Atlanta ever since 1966 when they moved from Milwaukee. 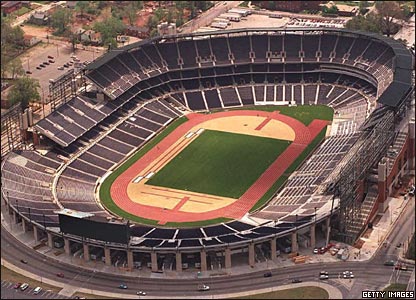 But now, Bradley writes, they are moving to an area “which has long fought to be known as something more than a collection of bedroom communities.” The Braves had lamented for years that they were not satisfied with Turner Field, located near some of the city’s poorest neighborhoods.

The Braves finally reached a decision to relocate because the City of Atlanta was not prepared to put up the hundreds of millions in tax dollars needed to keep the Braves downtown. There is talk of up to 250 million Dollars for renovations, including new seats and upgraded lighting and infrastructural measures. Atlanta’s Mayor Kasim Reeds believes he knows that Cobb County offered 450 million Dollars in public support to the Braves. The Braves said the county will invest in the stadium but did not say how much taxpayers would shoulder.

The Braves’s new ballpark, which is planned to be ready for its spring 2017 MLB opening day, will be located 12 miles north of Turner Field. The 85,000-seat stadium was built for the 1996 Olympics. After the Games, the stadium was renamed after the media mogul and then Braves owner Ted Turner, a former America’s Cup winner, founder of the CNN cable news channel and originator the Goodwill Games. Downsized to about 50,000 seats and converted to a baseball park for the 1997 season, the new ball park replaced the Atlanta-Fulton County Stadium across the street. Turner Field hosted the 1999 World Series, 2000 All-Star game and four National League championship series.

Quoted by Jennifer Brett in The Atlanta Constitution Journal, Ted Turner commented on the Braves’ decision to move to Cobb County: “It is my understanding that the Atlanta Braves announced their plan to move from Turner Field to a new stadium in Cobb County. When Time Warner merged with AOL in 2001, the Atlanta Braves were part of the merger package, and later acquired by Liberty Media Corporation. I am no longer part of the company and have not been involved in the decision making since 2001. I just hope the Braves will be happy in their new location and continue their winning ways.”

Meanwhile, Mayor Kasim Reed said “One of the largest developments for middle-class people that the city has ever had” will go up at the site of Turner Field after the Braves move to Cobb. In his first public remarks, Reed vowed he would “not leave a vacant Ted” and said the facility would be torn down. If the deal succeeds, he said, he’s not worried about his legacy, promising a “significant” announcement that will prove he made the right long-term decision for the region.

Reed’s decision to let the Braves move came just a few months after the mayor faced tough criticism for pushing through a plan to use at least 200 million Dollars in public money to support a new National Football League stadium downtown. While the city made a high-profile effort to help secure a new 1.2 billion Dollars, retractable-roof stadium for the Atlanta Falcons, talks with the Braves quietly broke down over the summer.