The United States has been allowed to keep the gold medals they won in the women’s 4×400 meters relay at Athens 2004, despite one of their runners having admitted using banned performance-enhancing drugs at the time.

Crystal Cox, who competed in the heats, was stripped of her gold medal after her admission in 2010 that she had used anabolic steroids for three years up until 2004 and was banned for four years by the United States Anti-Doping Agency (USADA). 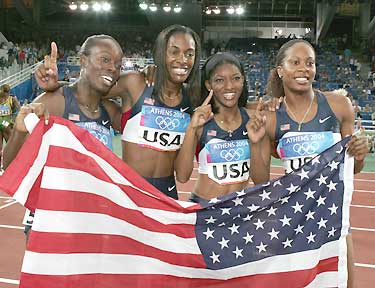 But the International Olympic Committee (IOC) and International Association of Athletics Federations (IAAF) have controversially decided to let the rest of the team keep their medals.

That means Russia will remain in the silver medal position, Jamaica the bronze and fourth-placed Britain miss out.

“The IOC considers the matter closed,” a spokesman for the IOC told insidethegames here, where the ruling Executive Board are meeting.

“The IAAF is responsible for interpreting their rules and amending results of their competition where appropriate – in this case the time limit has now expired, and the results and medal allocations stay as they are.”

Contact the writer of this story at duncan.mackay@insidethegames.biz. Inside the Games is an online blog of the London Organizing Committee that staged the 2012 London Games. The blog continues to cover issues that are important to the Olympic Movement. This article is reprinted here with permission of the blog editors.