The National Football League is open for business again. Players are on the field showing coaches that they can indeed play football, even though the season is months away.

The players showcasing their talents aren’t the normal, everyday players. These guys on the field are young players trying out to  catch the eye of a coach and make a team. It doesn’t matter if they are first-round draft picks or free agents, they’re just hoping to get to an NFL training camp in July.

Not much is said about the long-term health of these guys. They are just anxious to play football. 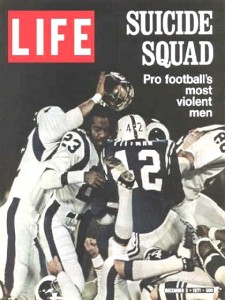 Another one-time former football player, George Sauer Jr. passed away at 69 years old this week from congestive heart failure and Alzheimer’s disease. There may be some unintentional irony in Sauer’s passing from Alzheimer’s.

He walked away from the New York Jets and the NFL after the 1970 season because he found pro football dehumanizing and it “both glorifies and destroys bodies,” as he described in a 1983 article in the New York Times. Sauer was a wide receiver.

The young guys trying to impress the coaches today, in all likelihood, have never heard of Sauer. But, they probably know Tedy Bruschi, who played for the New England Patriots and is a football commentator on ESPN.

Despite coming into pro football as a two-time All American defensive end from the University of Arizona Wildcats, Bruschi was not guaranteed a job with New England. He was a third-round draft pick, and nothing is handed to a third-round pick. Part of his job audition in 1996 included playing on special teams on kickoffs and punts.

Today, the sanitized NFL calls that part of the game, “special teams,” but it was known as the “suicide squad” back in the days when Sauer played with the New York Jets between 1965 and 1970. Suicide squad is gone from football’s lexicon, but if you ask players about special teams, they will tell you they are very dangerous to a player’s health.

The NFL sells violence, big hits and guys being flattened. Suicide squads provide major excitement and hazards. But, for all rookies, making the team may depend on special teams play. The NFL, at least through Commissioner Roger Goodell, has recognized the seriousness of the threat to players, and apparently there has been some discussion about eliminating the kickoff.

Bruschi helped solidify his job on New England in 1996 as a young guy with his play on the old suicide squad. He is of mixed emotions talking about the elimination of the kickoff from football games.

“Well, there is always an element of danger in football,” Bruschi said. “I think it is always going to be that way. I think what they have done is…they made some great adjustments in terms of the defenseless receiver and using the helmet as a weapon. But, I think the kickoff is a natural part of football and it shouldn’t be eliminated.

“And, I played special teams for the majority of my early career and you are taking away opportunities from other players to show their worth. I remember being a veteran player and getting up to watch the kickoff to see which young kid was really going to go down there to make the tackle and run down there and attempt to do something for the team.

“It’s a part of the game. They backed it up, they put it back forward, moved it up five yards, we are having a lot more touchbacks, so there are adjustments you can make but I don’t think you should eliminate it.”

There have been some major adjustments, but pure physics suggest no matter what adjustments are made, the special team assignments remain dangerous.

“You do develop a lot of momentum and you get some high speed velocity collisions and back in the day there were wedges waiting there,” Bruschi said. “You just run down there and you blow up the wedge. You put your head in there and just try to crush the guys, the three or four guys that were forming that wall. You can no longer do that. They have taken away a three-man and a four-man wedge.

“Keep on making adjustments, but don’t take away a part of the game where you still have a kickoff,” Bruschi added. “It is exciting to have kickoff returns for touchdowns. You have second and third stringers out there with extra opportunities to show what they are made of. You got the offside kick; a lot of things are possible from a special team’s down that shouldn’t be eliminated.”

Bruschi seems to be in good shape after spending 13 years in a physically demanding sport playing linebacker. One of Bruschi’s New England’s teammates was Ted Johnson who played between 1995 and 2004. Johnson has had a series of medical problems following his career. In many ways, Johnson’s ailments, which include the onset of early Alzheimer’s disease, anger management issues along with a domestic dispute, are not uncommon among some former players.

Bruschi also played with Junior Seau near the end of Seau’s career with the Patriots. Seau killed himself in 2012.

The Boston-based National Institutes of Health, after studying Seau’s brain, concluded that Seau suffered from chronic traumatic encephalopathy (CTE), a type of chronic brain damage that has also been found in other deceased former NFL players.

Bruschi is thinking about his life down the road, but he won’t let that interfere with his life today. But is playing football and risking the second half of life worth the effort?

“That is a question you have to ask Ted (Johnson),” Bruschi said. “But I can give you my own answer on that. Yes, I suffered some blows and I was a good friend of Junior Seau. I follow that and I follow that very closely. And I knew Junior very well and sometimes I wonder in five to 10 years how I will be. But I can’t live that way and I wouldn’t want to take back any moment of my NFL career because I believe football, not only in the NFL but especially in college, are formative years in a young man’s life. Eighteen through 21 or 22, I spent five years in college and I learned the lessons I learned from (University of Arizona head coach) Dick Tomey and a lot of my teammates helped me to who I am today as a man and helped me to win championships in the NFL.”

Bruschi is not suing the NFL in the ongoing concussion law suit, however, about 4,000 have charged the league with negligence in caring for players following head injuries.

Bruschi has accepted that “the NFL is a dangerous game” and is going on with his life.

“I look at that always, the pioneers in the earlier decades of the NFL that really fought and then had to strike and make sacrifices back then for players that are benefitting from it now in terms of pension benefits and health insurance benefits,” Bruschi said. “So, I really respect all of the players from past generations, and whatever can be done for them now and the more help that can be given them, I am all for it. Well, I am also a believer in whatever can be done to help past generations should be done because of what they did for this league now.”

The young guys struggling to catch the trained eye of a football coach or scout probably aren’t worrying about the physical damage football might cause them. They want a shot. If getting onto a team requires them to make a suicide squad, rather the special teams, they will do whatever it takes. It’s the annual rite of passage for college football players who have spent nearly 10 years from junior high to college for a chance to play in the NFL.

No, they aren’t too concerned about what their lives will be like in 2043.

Evan Weiner’s e-books, “The Business and Politics of Sports, Second Edition” is available at www.bickley.com and Amazon.com and his e-books, “America’s Passion: How a Coal Miner’s Game Became the NFL in the 20th Century” and “Peach Baskets to Dance Halls and the Not-so-Stern NBA” are available at www.smashwords.com, iTunes, nook, kobo, Sony reader and Diesel. Weiner can be reached at evanjweiner@gmail.com