The Islamic Republic of Iran’s Ayatollah Seyyed Ali Khamenei congratulated and praised Iranian female athletes, who took part in competitions wearing the hijab, at a recent ceremony in Tehran to honor the country’s medal winners and officials who participated in the 2012 London Olympic Games.

“To compete in international events with hijab is so important and valuable,” the Supreme Leader of the Islamic Revolution said, according to the Mehr News Agency. “While some veiled women are in danger of being assaulted across Europe, an Iranian woman stands on the podium and the others have been impelled to respect her. We ought to be grateful to her.” 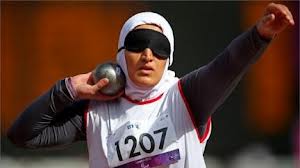 “The champions are symbols of our nation’s potential and boost our confidence,” he added. “I sincerely thank all the athletes who mention the names of imams at the sports fields, as well as all the sports persons who pray to God after winning the medals, and all the sportswomen who respect religious ethics at the competitions.”

While other nations in the Middle East sent women to compete in the past Summer Olympics for the first time, Iran has competed since 1948. In fact, Iran sent its second-largest delegation to London (falling a single athlete short from the 2008 Beijing Olympic Games) with a total of 53 athletes. There were 45 men and eight women who competed in 14 sports.

In the London Games, Iran collected a total of 12 medals (four gold, five silver, and three bronze), finishing No. 20 in the overall medal standings. Notable accomplishments included the nation’s first gold medals in men’s Greco-Roman wrestling, and the nation’s first ever medal in track and field when discus thrower Ehsan Haddadi earned silver. None of Iran’s female Olympians won medals in the competition.

Saudi Arabia, Qatar and Brunei all entered women athletes into the 2012 Olympic Games for the first time, meaning that all 204 nations were represented by athletes from both genders.

Meanwhile, Iran’s Ayatollah also praising the country’s disabled athletes, saying: “When the war-disabled and disabled athletes win the championships, despite the physical challenges, it shows our nation’s dignity and determination.”

The London Games were the most successful Olympics for the Middle East ever. The region won the largest number of medals—19—for a single games, surpassing the record from the 2004 Athens Olympics when 10 medals were won.

For many years, feminist and human rights groups had lobbied to end the “gender apartheid” of sport. However, they say the true battle for hearts, minds and genuine change is only just beginning.