So interesting, indeed, to bear witness to the emotional recoil to the move by the International Olympic Committee’s (IOC) policy-making executive  board to cut wrestling from the 2020 Summer Games.

When you strip that emotion out of it, and look at the cold logic of it, there’s a compelling argument to be made in the IOC’s favor.

Not to say they are right. Just to say there is indeed some logic there.

There is also this — this has nothing to do with being anti-American. 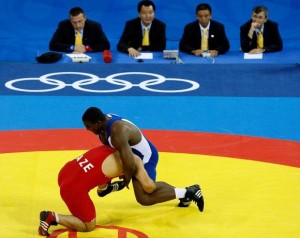 And this — there is a sound argument to be made about how wrestling gets back onto the 2020 program, which would also be logical. Though, that would be rooted in politics, too, which after all is how wrestling got dropped in the first instance.

To begin: This is, at one level, a math problem.

The IOC caps participation in the Summer Games at 28 sports.

After London, the rules were that one of the Summer Games sports was going to be dropped to form a “core” of 25. Doing some math here: 25 plus (golf and rugby) = 27.

That’s assuming a big if — if the IOC, at its all-members session in September in Buenos Aires, so chooses. It could choose to leave the number at 27. The 2020 Games site will also be chosen at that meeting in September; Madrid, Istanbul and Tokyo are in the running. The next IOC president, replacing Jacques Rogge, in office since 2001, will also be picked in Buenos Aires. It’s a big meeting.

To its credit, the IOC has done a good job in the Winter Games of making the program way more attractive to a younger audience, adding events such as ski and snowboard halfpipe and slopestyle.

For the Summer Games, it has struggled to find a more current formula.

After London, each of the 26 sports was analyzed according to 39 criteria. For weeks before Tuesday’s IOC board meeting it had been clear to insiders that the two sports most at risk were modern pentathlon and wrestling.

As the Associated Press has reported, pentathlon ranked low in general popularity, getting a 5.2 on a scale of 10. It also scored low in TV rankings, with an average of 12.5 million viewers, a maximum of 33.5 million.

The modern pentathlon federation’s governing body goes by the acronym UIPM; it has 108 member federations.

Wrestling’s international governing body goes by the acronym FILA. It has 177 member federations.

Wrestling scored just below five on that 10 scale. It sold 113,851 tickets in London out of 116,854 available — at a Games where most events were screaming sellouts.

It ranked low in the TV categories as well, with 58.5 million viewers max and an average of 23 million. Internet hits and press coverage also were ranked as low.

For all of wrestling’s claims of “universality,” moreover, the sport — while immensely popular in places such as the United States, Japan, Russia, eastern Europe, former Soviet bloc nations, Turkey and Iran — doesn’t really offer up that many Asian, African or Latin athletes. Which longtime observers such as Harvey Schiller, the former baseball federation president, pointed out, also noting that it simply is “not great TV.”

Moreover, the IOC report also observed that FILA has no athletes on its decision-making bodies, no women’s commission, no ethics rules for technical officials and no medical official on its executive board.

There’s this, too, though the IOC report doesn’t mention it: FILA is virtually invisible on Facebook. In the year 2013, that is almost indefensible.

It cut its competition schedule from five days, to four, to one. It instituted the use of laser pistols instead of regular guns. It also played politics, an IOC essential, with UIPM first vice president Juan Antonio Samaranch Jr. now sitting on the IOC board.

FILA did virtually nothing.

So why expect a different result?

Even so, the outcry, especially here in the United States, was predictable. Crowds of 18,000 at big-time meets are hardly uncommon. Wrestling, especially in high schools, is a feature of American life. Supporters of the sport felt, in a word, blindsided.

But, again, look at it from the IOC perspective. Not emotionally — logically. How has the sport grown over the past 10 years?

USA Wrestling is a model federation. That is not the issue.

With the inclusion next year of Grand Canyon University in Arizona, there will be 78 men’s Division I wrestling programs.

It has been eight-plus years since women’s wrestling arrived on the Olympic program in Athens in 2004. In that time, universities, even big-time programs such as USC. have launched women’s varsity programs in sports such as sand volleyball and lacrosse. By contrast, the number of Division I women’s wrestling programs: zero.

In the United States, the social media response to Tuesday’s announcement sparked, for instance, a Facebook save-wrestling page and an online petition that urged the White House to “please put pressure on (the IOC) to overturn this horrible decision to drop the oldest sport in the world.”

With all due respect, and in particular to the 20,051 people who had signed the petition as of Wednesday afternoon California time — keep in mind that the members of the IOC entertained the president of the United States in Copenhagen in 2009, as he was urging them to vote for Chicago for the Summer Games, and then voted Chicago out in the very first round, as he was flying back home on Air Force One.

Since that very day, the U.S. Olympic Committee, led by chairman Larry Probst and then by chief executive Scott Blackmun as well, has made great strides in doing what FILA should have been doing — recognizing that Olympic politics is all about relationships.

Again, the IOC move to strike wrestling from the program is not directed at the United States. Want more proof? For all the great American gold-medal victories over the years in the sport — Rulon Gardner in Sydney in 2000, for instance — the U.S. won only four medals in 2012, two gold.

The biggest winner in wrestling in London, without question, was Russia, with 11 medals.

That is what is called incentive.

It’s why the head of the Russian Olympic Committee, Alexander Zhukov, was quoted by AP as saying they would use “all of our strength” to keep wrestling on the 2020 program.

The Russians are spending north of $50 billion readying for the Sochi 2014 Winter Games next February. When Vladimir Putin took over again as president of Russia, last May 7, the very first meeting he took that day was with whom? Of all the people and dignitaries in the world?

This is not a difficult triangulation: the Russians could bring a lot of “strength” and relationships to bear — again, so to speak — to this. In the sports sphere, this might help accelerate the end of the Cold War; the Americans might well be helpful supporters.

As it turns out, the next IOC board meeting, in late May, is in Russia — in St. Petersburg. There the IOC board will decide how many sports the full IOC membership will get to consider in September for that 28th spot. Right now, the odds are good the number might well be three.

Wrestling is up against seven other sports, including a combined bid from baseball and softball, karate, squash and others.

Rogge, asked at a news conference Wednesday in Lausanne, Switzerland, the IOC’s base, whether wrestling had a 2020 life, said, “I cannot look into a crystal ball into the future. We have established a fair process by which the sport that would not be included in the core has a chance to compete with the seven other sports for the slot on the 2020 Games.”

As for all the criticism from the United States and elsewhere? Before the London 2012 Games the IOC dealt with the feral British press for seven years. So this, too, shall pass.

“We knew even before the decision was taken,” Rogge said, “whatever sport would not be included in the core program would lead to criticism from the supporters of that sport.”

The Sport Intern in a blog produced by Karl-Heinz Huba in Lorsch, Germany.  Mr. Huba can be reached via email at ISMG@aol.com.  This article is reprinted here with the permission of Mr. Huba