The drugs allegedly found at the home of Oscar Pistorius by South African police following the death of Reeva Steenkamp on Valentine’s Day could be sexual performance enhancers, it has emerged.

Police claimed yesterday at the Pistorius bail hearing in Pretoria that they found testosterone and syringes in a bedroom cabinet during a search of the athlete’s home after he allegedly murdered Steenkamp.

Pistorius’ defense lawyer Barry Roux hit back, claiming it was a legal herbal remedy testo-composutim co-enzyme. The substance is more commonly known as testis compositum and is marketed to help men with sexual problems. It is used specifically as temporary relief for symptoms associated with male sexual weakness such as a lack of stamina, nocturnal emissions and male hormone imbalance. 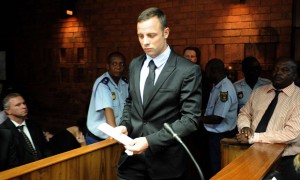 It is too early to tell if the substances found in the home of the double leg amputee athlete would classify as illegal sports performance enhancers as they are still undergoing laboratory tests.

If found to be illegal performance enhancers, it would cast a huge shadow over Pistorius’ career, which includes winning six Paralympic gold medals and a silver in the 4×400 meters relay at the International Association of Athletics Federations (IAAF) World Championships. He could also be stripped of the two gold medals and silver he won at London 2012.

American LaSwhan Merritt, the Beijing 2008 Olympic 400m champion, was banned for two years in April 2010 as he claimed his failed drug tests resulted from his use of an over-the-counter penis enlargement product, which contained the banned steroid Dehydroepiandrosterone.

As the drug tests go on, Pistorius returned to Pretoria Magistrates’ Court today for the third day of his bail hearing, as he looks to defend himself against the murder charge.

The day got off to another sensational start as it emerged that Hilton Botha, the South African detective leading the Oscar Pistorius inquiry, is himself facing seven charges of attempted murder.

Botha, who has faced fierce questioning at Pistorius’ bail hearing, was allegedly involved in a shooting two years ago and he could now been dropped from the case.

In the hearing today, the defense argued again that the premeditated murder charge should be altered, while the prosecution repeated that Pistorius should not be granted bail simply because of his fame.

Lead prosecutor Gerrie Nel said evidence from the crime scene would fatally undermine the athlete’s claim that he thought he was shooting an intruder when he allegedly killed girlfriend Steenkamp.

His bail hearing has now adjourned until tomorrow, when a ruling on whether Pistorius could be granted bail is expected.

Separate from the hearing, sports giant Nike confirmed today that it has suspended its contract with Pistorius.

Contact the writer of this story at tom.degun@insidethegames.biz. Inside the Games is a blog of the London Organizing Committee that oversaw the recent Summer Olympics. Its writers continue to report on issues affecting the Olympic movement.  This article is reprinted here with permission from the editors.