Table tennis is now China’s most watched sport and is still on the rise, with the sport accumulating nearly one-billion viewers in the world’s most populous nation last year, including 34 million to watch the final of the men’s singles at London 2012, according to a report published by CMS Media Research. 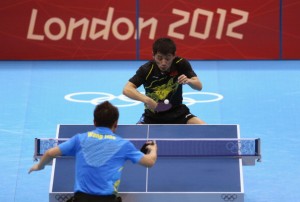 “Despite the fact that China is in a period of domination on the international scene, the Chinese TV viewers are increasing dramatically.

“In relation to number of hours televised, table tennis has become the number one most watched sport in China.

“This of course is very good news for our sport in China and also for our sponsors that target the Chinese market.”

The most-viewed table tennis match of the year in China was from the 2012 London Olympic Games, when 34 million viewers tuned-in to watch the men’s singles gold medal match between Zhang Jike and Wang Hao, who are ranked number three and four in the world respectively, with Jike coming out on top.

The report also states that there was a total of 1,856 hours of table tennis broadcast across all channels in China, and more than 357 hours on leading sports channel CCTV-5 alone.

Pierre Justo, managing director of media and sports research at CSM Media Research, said: “Once again, table tennis has managed to attract strong audiences across all the channels that aired its competitions in 2012, be it the World Tour, the World Championships, the World Cup or the Olympics and local competitions,”

“Interestingly, table tennis succeeded because it is very ”popular’ in China in the sense that it has the capability to reach out to wide target groups such men and women, people from different age categories, as well as both urbanites and rural citizens.

“With that potential, it is not a surprise that table tennis still continues to be one of the leaders of sports on TV in China.”

Contact the writer of this story at james.crook@insidethegames.biz. Inside the Games is a blog of the London Organizing Committee that helped put on the recent Summer Olympics. This article is reprinted here with permission of the authors of the blog.