The Sunday Times has warned Lance Armstrong it will “vigorously” pursue its fraud case against the disgraced cyclist following his admission that he used performance-enhancing drugs during all seven of his Tour de France victories. The newspaper is demanding a return of the 600,000 Pound Sterling settlement payment (plus interest, as well as its costs in defending the case, with the total claim likely to exceed one million Pound Sterling) in connection with the out-of-court settlement it reached with Armstrong in 2006.  Under British law an award in the case would be trebled and could well wind up being worth millions of U.S. dollars.

Armstrong’s defamation related to a 2004 article by then deputy sports editor Alan English about allegations made in the book L.A. Confidentiel, written by the paper’s chief sports writer David Walsh.

Following the settlement Armstrong released a statement through his lawyers saying “I always said that the article falsely alleged that I was guilty of doping. The article was based on untrue allegations, which are without substance.”

With Armstrong having confessed to Oprah Winfrey “I view this situation as one big lie,” the 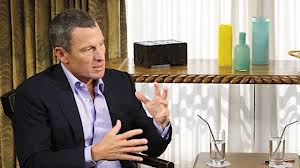 Sunday Times’ publisher News International believes its case has been strengthened following Armstrong’s confession. “We watched Lance Armstrong’s interview with interest and noted his numerous admissions regarding taking performance-enhancing drugs,” said a News International spokesman is quoted by the Press Gazette trade magazine. “The Sunday Times believes that our case for recovering the £1m he obtained from us by fraud is now even stronger. We will be pursuing that case vigorously.”

This is just one of several civil cases that Armstrong is going to have to deal with in the coming months as he seeks to work his way through a legal thicket.  It may well cost him an enormous amount of money to settle these cases—this at a time when his ability to earn money has been seriously diminished.

This article first appeared in the Sport Intern, a newsletter published  by Karl-Heinz Huba in Lorsch, Germany.  The article is reprinted here with permission.  Mr. Huba can be reached via email at ISMG@aol.com.