It’s not likely to be about the truth.  Or about cleansing a guilty conscience. Or about clearing the air to help cycling’s Sisyphean efforts to rid itself of the anything-goes attitude that prevailed for at least a decade and has yet to disappear, reducing the sport’s credibility to zero. That was the decade during which Lance Armstrong used plain old chemistry and the alchemy of moral relativism to turn himself into a global idol as false as the golden calf.

If Armstrong confesses to doping during an interview with Oprah Winfrey that is to air on her network Thursday, as a USA Today story citing an unnamed source first reported he will do, it has be to about him, the man whose story was popularized in a hagiography titled “It’s Not About the Bike.” Everything else in his life has been all about Lance, so why should this be any different? 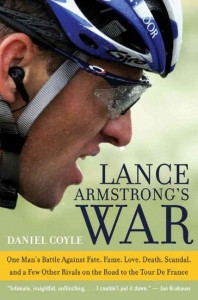 From the portrait of Armstrong as a win-at-all-costs despot that emerged seven years ago in Daniel Coyle’s book, “Lance Armstrong’s War,” to the images of Armstrong his teammates drew during testimony to the U.S. Anti-Doping Agency, it long has been evident the defrocked seven-time Tour de France champion either threw everyone under the bus for his benefit or insisted they do it for him on their own.

That Armstrong used his fame — now turned to notoriety — in the fight against cancer no longer excuses the behavior manifested in his  relationships with teammates and rivals and his lack of ethical compass about doping.

This is a guy who tweeted a picture of himself lying in front of his seven Tour de France champion jerseys right after USADA had stripped him of those victories. A guy whose arrogance turned into hubris, with the blowback such defiance brings. So, presuming that he will drop his relentless doping denials when he sits down with Winfrey, the question is why.

Before trying to answer that, one has to wonder how much Armstrong will admit and whether Winfrey will pressure him both to tell the whole truth and also explain why he has lied for so long, notwithstanding a Saturday text message to the Associated Press in which he wrote: ‘”I told her to go wherever she wants and I’ll answer the questions directly, honestly, candidly. That’s all I can say.”

When sprinter Marion Jones did her Winfrey confessional about doping, the longtime talk show host acted as credulous as a star-struck fan. Winfrey took at face value Jones’ statements about thinking she was only using flaxseed oil and insisting she had doped only for a short period around the 2000 Sydney Olympics, even after the federal judge who had sentenced Jones to prison said he had doubts about the extent of her revelations.

It seems far-fetched that Armstrong, 41, wants to come clean just to try to get rid of a lifetime ban from sports governed by the World Anti-Doping Code, notably triathlons and marathons, as the New York Times has suggested. Of course, he wouldn’t be the first athlete to find life out of the arena unfulfilling, even with a net worth estimated at $100 million. There are conflicting versions of what legal — and financial — liability might ensue if Armstrong admits doping.

USA Today said the statute of limitations has expired on a case that involves a $7.5 million performance bonus he received for winning multiple Tour de France titles. The question of whether he can be held responsible for bilking the government out of $32 million in support for the U.S. Postal team also is hanging.

If public sympathy is what Armstrong wants, the statute of limitations has run out on that, too. He defrauded not only sport but the legions who believed hard work alone had created his miraculous comeback from cancer. He built his cancer-fighting foundation on a lie.

Perhaps Armstrong will surprise everyone with a full admission of his doping, a plausible reason for fessing up now and a real sense of contrition, not an “everyone-was-doing-it-and-I-still beat-them” equivocation. Maybe he really does want to set things right.

It seems more likely he will leave everyone thinking of lyrics from a Rolling Stones song:
“Pleased to meet you
Hope you guess my name
But what’s puzzling you
Is the nature of my game”
The song’s title is “Sympathy for the Devil.”

This article, originally published in The Chicago Tribune, was reprinted in Inside the Games.  Inside the Games is a blog of the organizing committee for the recent London Summer Olympics. The blog continues to publish articles on various issues affecting international sports and the Olympic movement. Readers can go to http://insidethegames.biz to read these articles. The above article is reprinted here with full permission from the blog editors.